Had a few days off. First day just paddled and looked around. Was with my nephew and SIL and they just wanted a paddle trip.

Returned at daylight the next day. Caught a keeper trout on top right away. Glass calm but storm clouds all around. Next was a keeper red on top. He gave a nice fight and I botched the netting. I was likely not keeping anyway. Picked up a couple more trout. Saw a school of baitfish and had a ton of action. Lots of short strikes. Had a small tarpon make a pass at my plug. I think it did it twice but I saw him well the second time. Hooked something and it seemed like a nice fight. Then it really took off with a massive swirl. Line then goes slack. 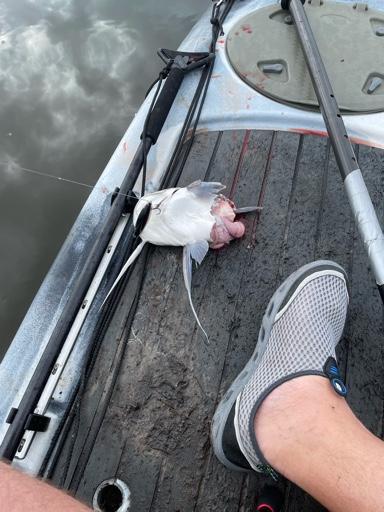 As I was unhooking him 2 five foot or so bull sharks were circling until one of them got a smack with the paddle. This broke up the bait so I took a few minutes break. 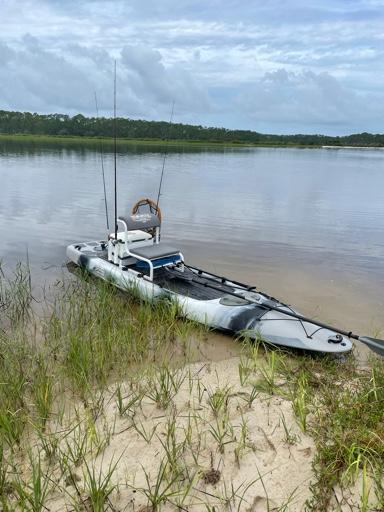 Started paddling back in. Stopped at a few bars and hooked a small red. He was double hooked so I grabbed the leader to swing him on the deck. Out comes the plug and it snaps into my hand like a slingshot. 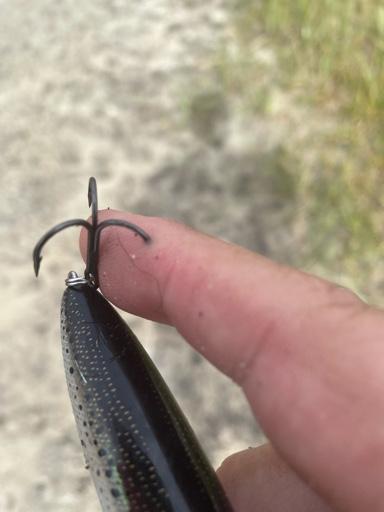 Almost got it out before it started hurting. Decide to paddle in and load the kayak one handed. Real fun.

Wife talks me into going to urgent care. We end up in ER as urgent care could not see me for 2 hours. While sitting there they bring in the highly medical removal items. 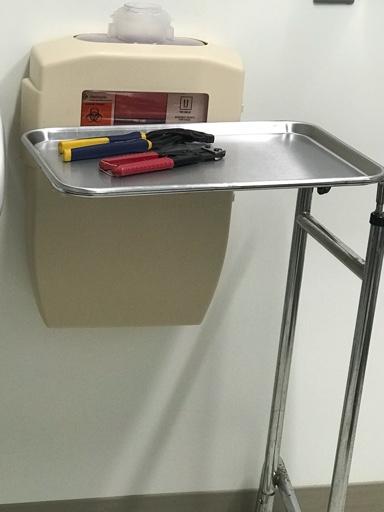 I sit for another hour and am seeing my day slip away. I take the dikes and clip the Split ring. Stare at it for a minute. Wife says “Don’t you dare do it”. I suggests she turn her head if she does not want to watch. I satisfy myself that the channel locks can hold it tightly. So three hours after it goes in I am tired of the dangling hook and snatch it out. 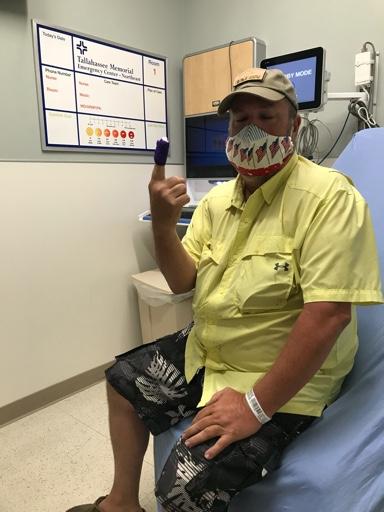 The nurse comes in and sees me bleeding and I laugh. She just says you are crazy and wraps my finger. Doc comes in and prescribed antibiotics.

Practicing near several lakes, I had taken a lot of fish hooks out of my patients, but that was my first human removal.

If any of y’all need one taken out I will volunteer. Can’t promise it won’t hurt but I won’t make you wait 3 hours!

Windy as heck on Tuesday and nothing but short strikes. Even windier today. Came home.

I’m gonna eat THAT red if he grows up!


Sent from my iPhone using Tapatalk
Ducks, turkeys, flats fishing. Who has time for golf?
Top

Sucks and that red needs to be dinner, I don't blame you, I'd have snatched it out too. It was funny when I was 10 and managed to hook myself in the back and the Dr at the clinic tried to cut the hooks with forceps and my grandad had to go buy a pair of lineman pliers from the hardware store to cut the hooks off to pass them back through.

Just press down the barb with a pair of pliers....BEFORE.....you go fishing. You can't fish on my boat with barbed hooks. It might hurt, but they come out without a trip to the ER.

And, no you won't lose all your fish if you keep the line tight.

And, it's much much easier to release the small ones unharmed, so it's a win, win.
“Life is fraught with opportunities to keep your mouth shut.”
― Winston S. Churchill
Top

Yikes… never a good time when hooks bite into the wrong species. Sounds like things were rolling until that moment.

I seem to remember someone on here using a method of icing the hand/finger with the hook in it and it came out easily. I haven't tried it, but have kept it in mind if it ever happens. Worse case maybe ice it down and then snatch it out.
Top

Billy: I ran it under cold tap water for a few minutes before I snatched it out. It hurt a bit, but not at all unbearable. Just a quick pain. If I had dikes and pliers on the yak, I could have kept fishing. I was just afraid to snatch it out and wind up with the other treble in another location!

Doom: That's funny. The ER doc asked if I had any tools in my truck and I headed out to get them when a nurse spoke up and said "this is not our first hook removal, we have the tools".

Rocky: You are right for sure. My one and only boated tarpon had the hook broken, well below the barb when we went to unhook it. I kept the hook and have it attached to the pic of the tarpon at boatside that I had made. I think I was more proud that I kept the line tight for the hour long fight and still pulled the fish along side.

Red: Fun trip I will remember for a long time. heck, the finger barely hurts now. Makes for a good story too.

I took some out of my face as a kid. None were in to the barbs, but it was a topwater plug and when I would pull on one hook, it made the others dig in. I paddled home and made an easy removal standing in front of a mirror.
Ducks, turkeys, flats fishing. Who has time for golf?
Top

Ever since I read that story I make sure there is a good pair of pliers with cutters on the boat. I hope I never has to use them!
Top

Just loop a line throught the bend of the hook and yank...Worked everytime I've done that with minimal pain and blood....even whith stretch 30 hooks.
"You got time to breathe, you got time fur music..."
...Briscoe Darling Jr.
JB
http://zydecozoo.com
Top

Ever since I read that story I make sure there is a good pair of pliers with cutters on the boat. I hope I never has to use them!

This is a good reminder that I need to put a pair in the tackle box.
Top
Post Reply
9 posts • Page 1 of 1