Beautiful day, launched out of Carrabelle to calm seas. Didn't find the grouper, but had a blast catching half a dozen small AJs on Yamaha reef, around 25-32 inches each. Which led us to wish we could get a signal out there to Google how you tell the difference between a lesser and a greater amberjack?
So here are 3 questions for the forum:
1 how do you tell the difference?
2. Are lesser AJs caught around here? In 70 ft deep water?
3. Why can't they put cell tower equipment on the Air Force towers?

I'm assuming this is just a small greater AJ (returned to water) since the dark stripe extends thru the eye to the snout? 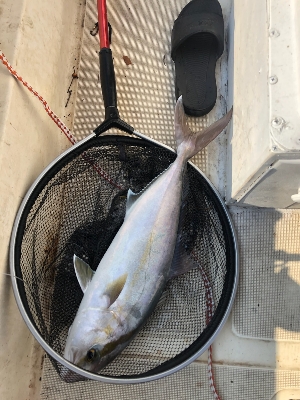 Lesser AJ's typically don't get above 20in. Given you mentioned being above 25", I'd say it's not a Lesser. The eye band is also a misnomer, as both Greater and Lesser AJ's can have the band extend through the eye. Colors/patterns are always a bit suggestive IMO, and I try to look at other morphological features, such as eye/mouth placement or fin count. Lesser AJ's will have a larger eye compared to its body, but it's really hard to compare when you don't have both species side by side. However, the top dorsal will have 7 spines for a Greater, and 8 for a Lesser, and the surefire way to tell is gill raker count. Greater's will have 11-19 vs 23-26 for Lesser, but that requires sacrificing a fish if they aren't calm (which is doubtful).

There are also Banded Rudderfish and Almaco Jacks. Almaco's are very distinctive, with a deep body and tall anal/dorsal fin. Really can't miss ID an Almaco, but the Banded Rudderfish can be confused for a Greater or Lesser AJ. Banded's don't get much bigger than an Lesser, however, they do have white tips on their fins, which your picture clearly shows. If I didn't have a reference size, the lighter color and white tips would make me guess Banded Rudderfish, which goes to show just how much variability you can see in colors sometimes. Still a Greater AJ due to the size, but either way...fun to catch.
Top

Wow, thanks for the in-depth review! I think I'll need to catch a bunch of each before I'm confident ID'ing them