Steinhatchee 4/8-10:Or how I got conned into painting a fence

Steinhatchee 4/8-10:Or how I got conned into painting a fence

After being married to someone for 7 years who I started dating in 2008, my wife definitely knows how to manipulate me when it comes to fishing. After a disagreement over chemical use for weed control in our yard she declared flats fishing to be off limits for the near future. Of course the next day she changed her mind....as long as I painted our fence, which she was supposed to have done during the covid lockdown in 2020 but apparently she hated the smell of the highly flammable acrylic lacquer I chose. So the fence was painted in record time, in fact I hard to start painting left handed as I was giving myself tennis elbow on the right and I didn't want it to interfere with fishing. So phone calls were made and myself and two others had big plans for the hatch. However, the poor soul that bought my old seapro was of these said people and he took it to savannah for a heavy fishing weekend to pregame for the hatch during which disaster struck and the foot finally grenaded itself. So we were down to a single 17ft key west skiff for all three of us to fish out of instead of having two boats.

But that didn't get us down, however, Wednesday night one of the crew decided to go rekindle an old flame and I told him I had zero faith he would make it to meet us in tifton at 7.....and shocker he didn't. In fact when he called to let me know he was leaving we were in live oak so we had a little time to kill before he could make it to the ramp. So we launched and ate an early lunch at hungry howie's before making our way to the gulf.

We were greeted by the largest school of ladyfish I've ever seen instead of the spanish we were chasing. 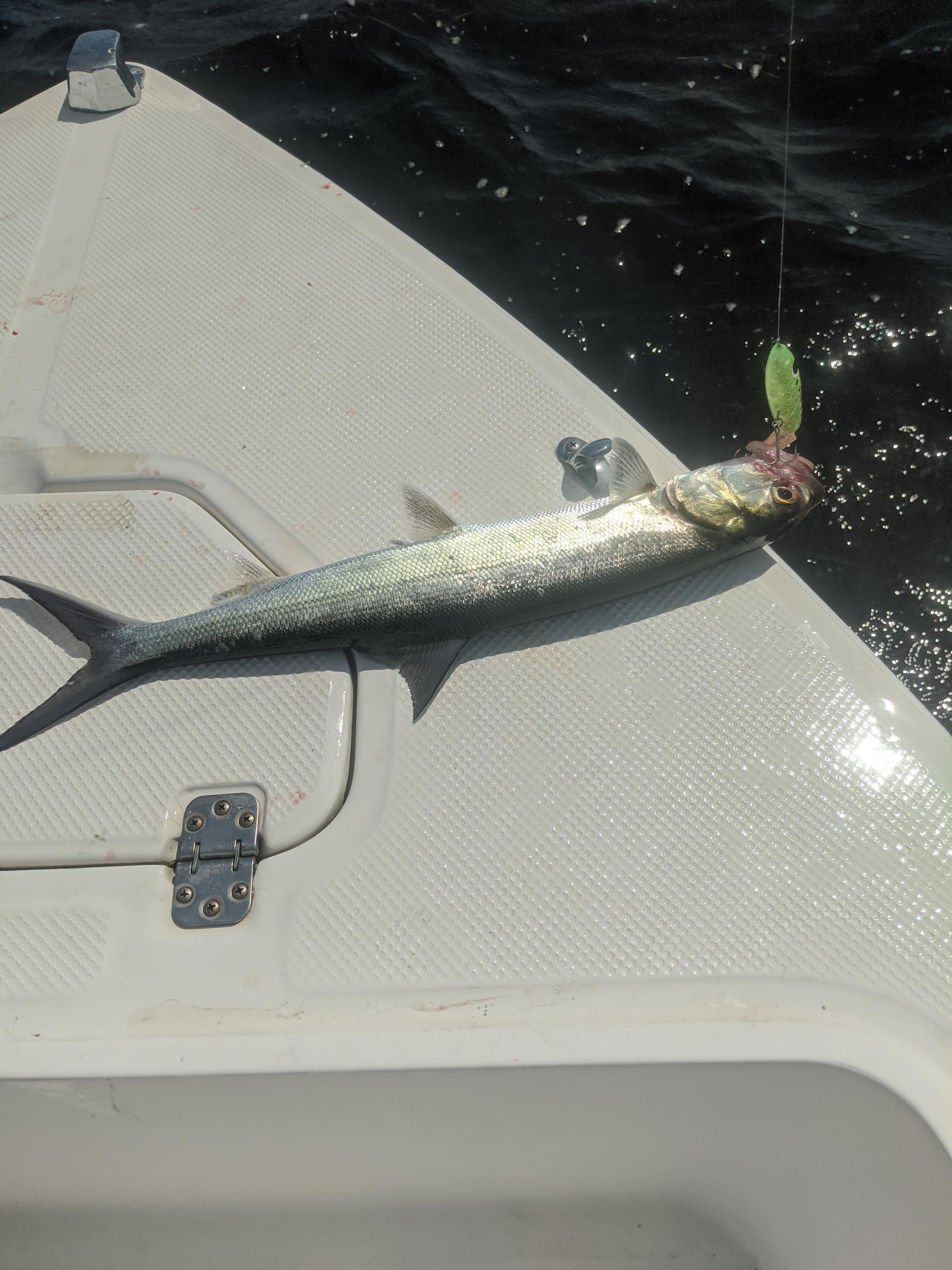 And of course their friends were no better 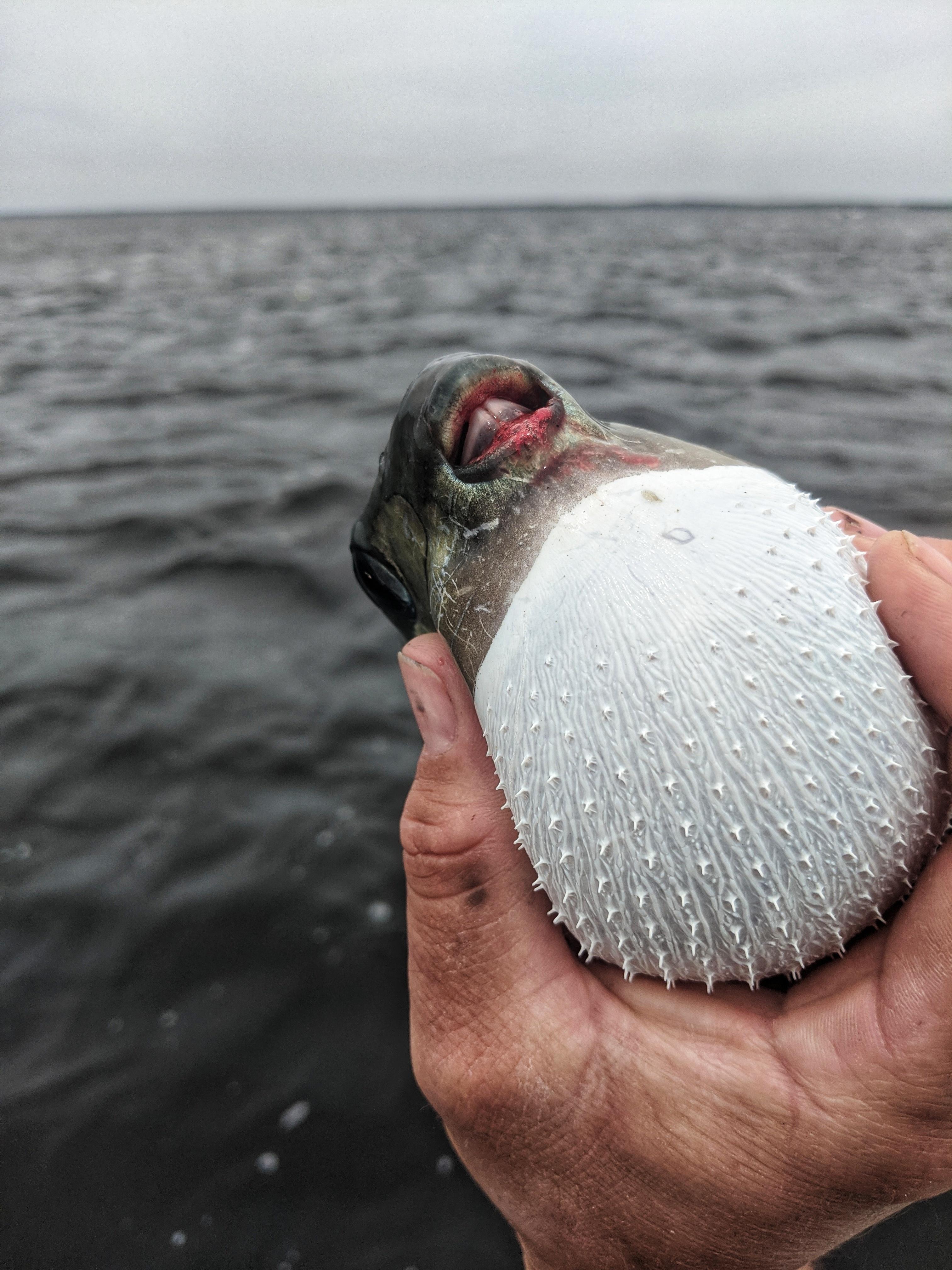 But after the fun of a dozen ladyfish the one who stayed up all night with buzzards instead of soaring with the eagles showed up and we made the run back to the ramp and headed for Rocky Creek. 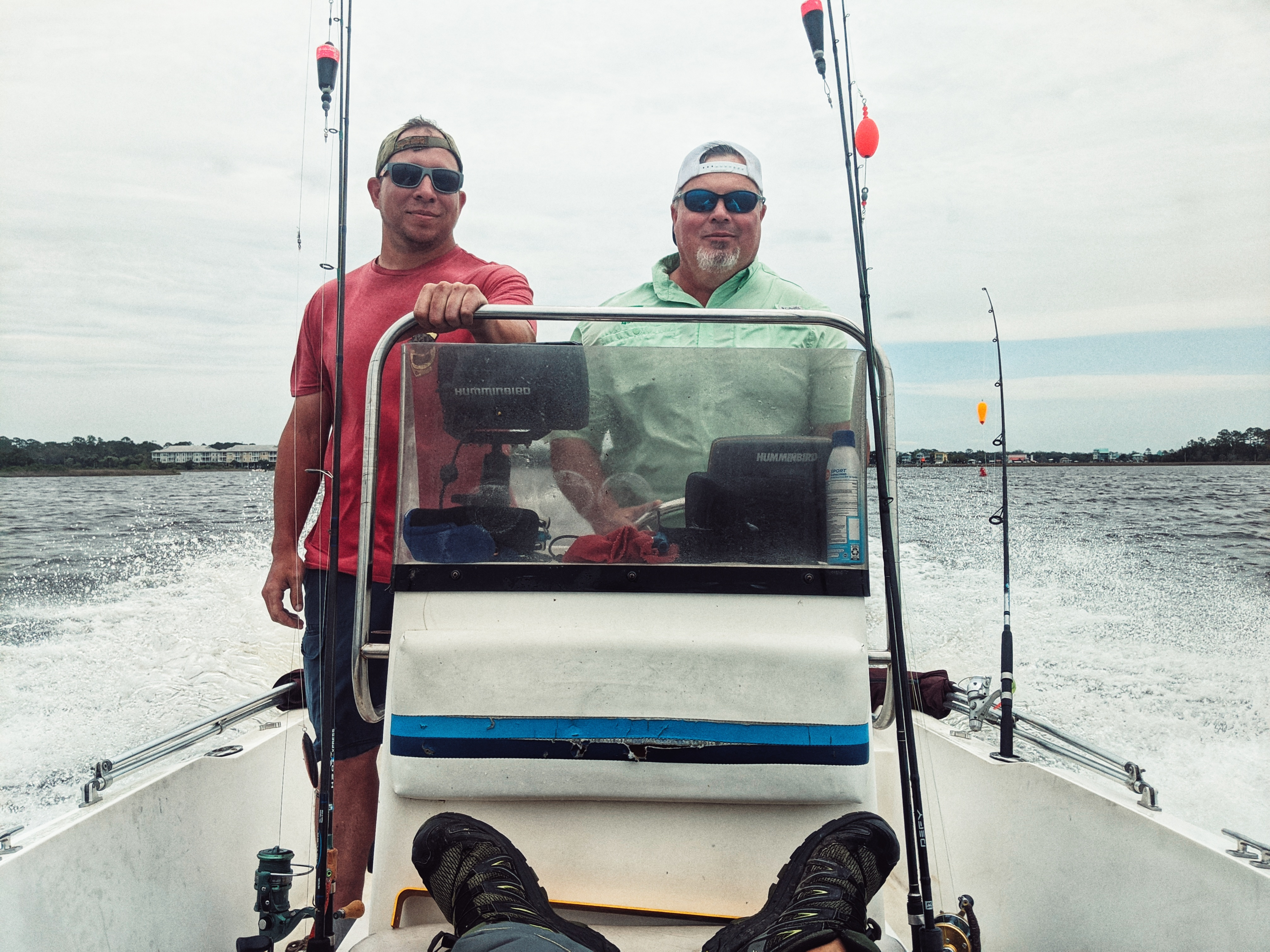 And we were greeted by a marker I do not remember 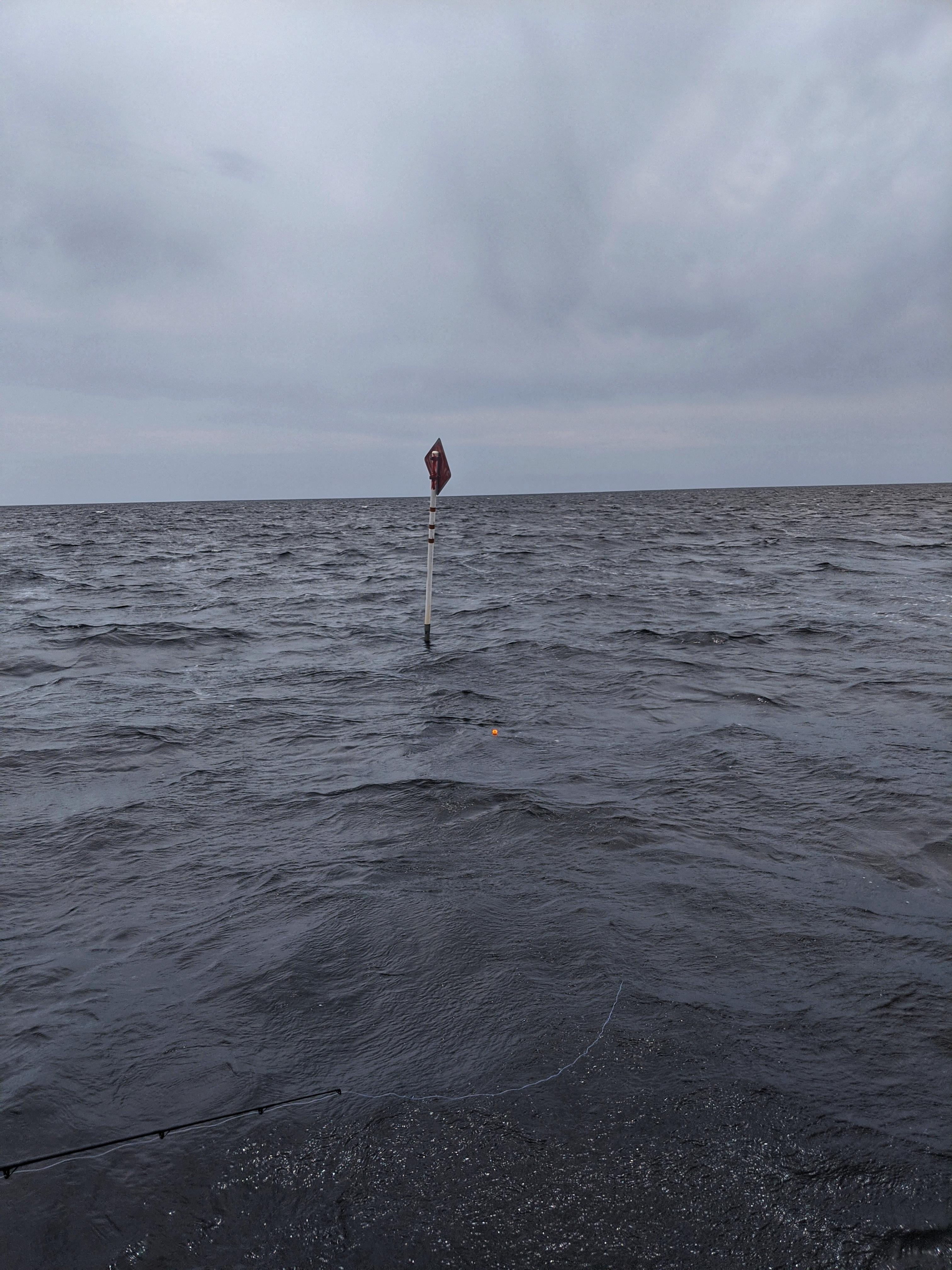 But we caught a decent amount of short trout 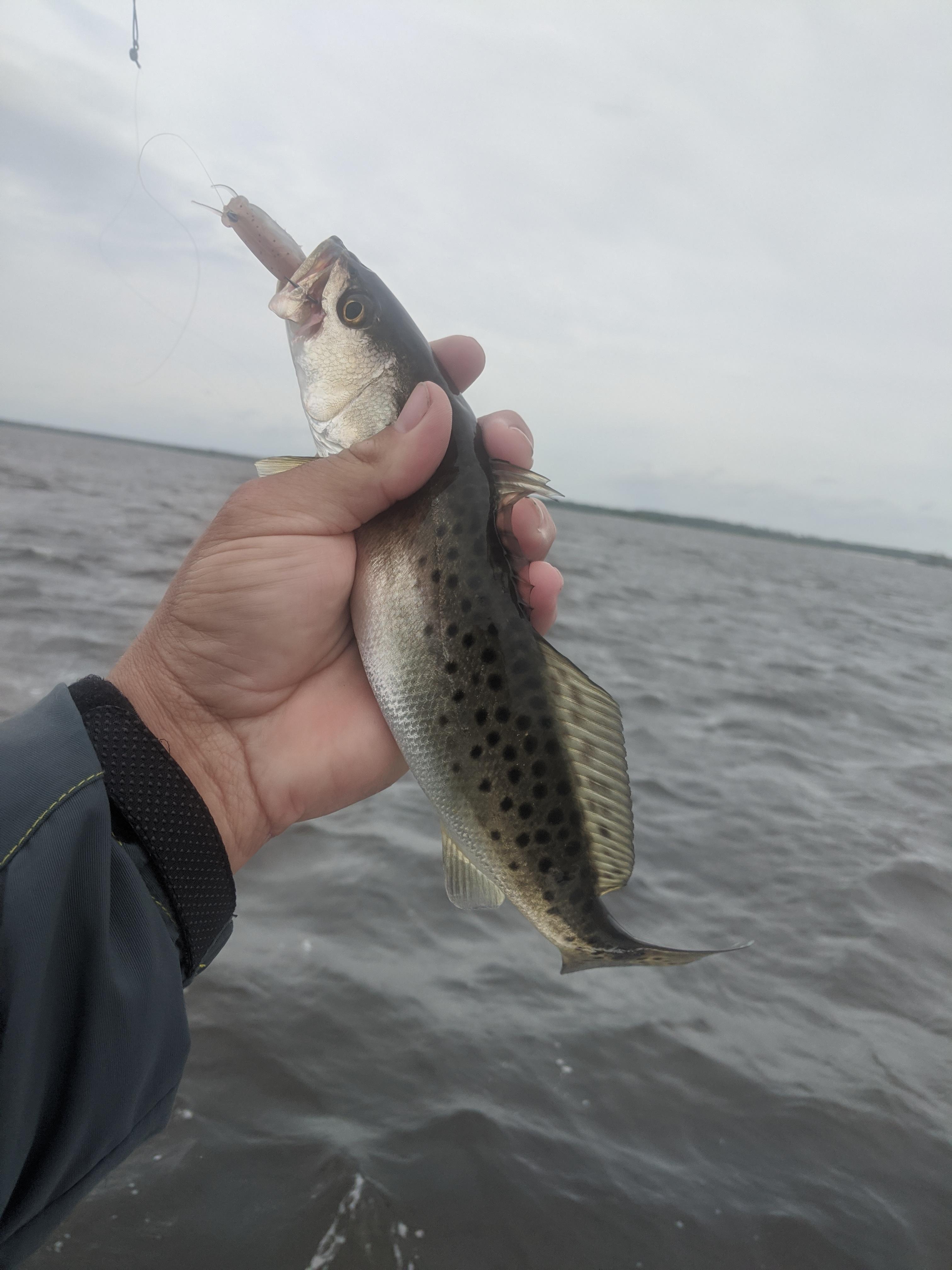 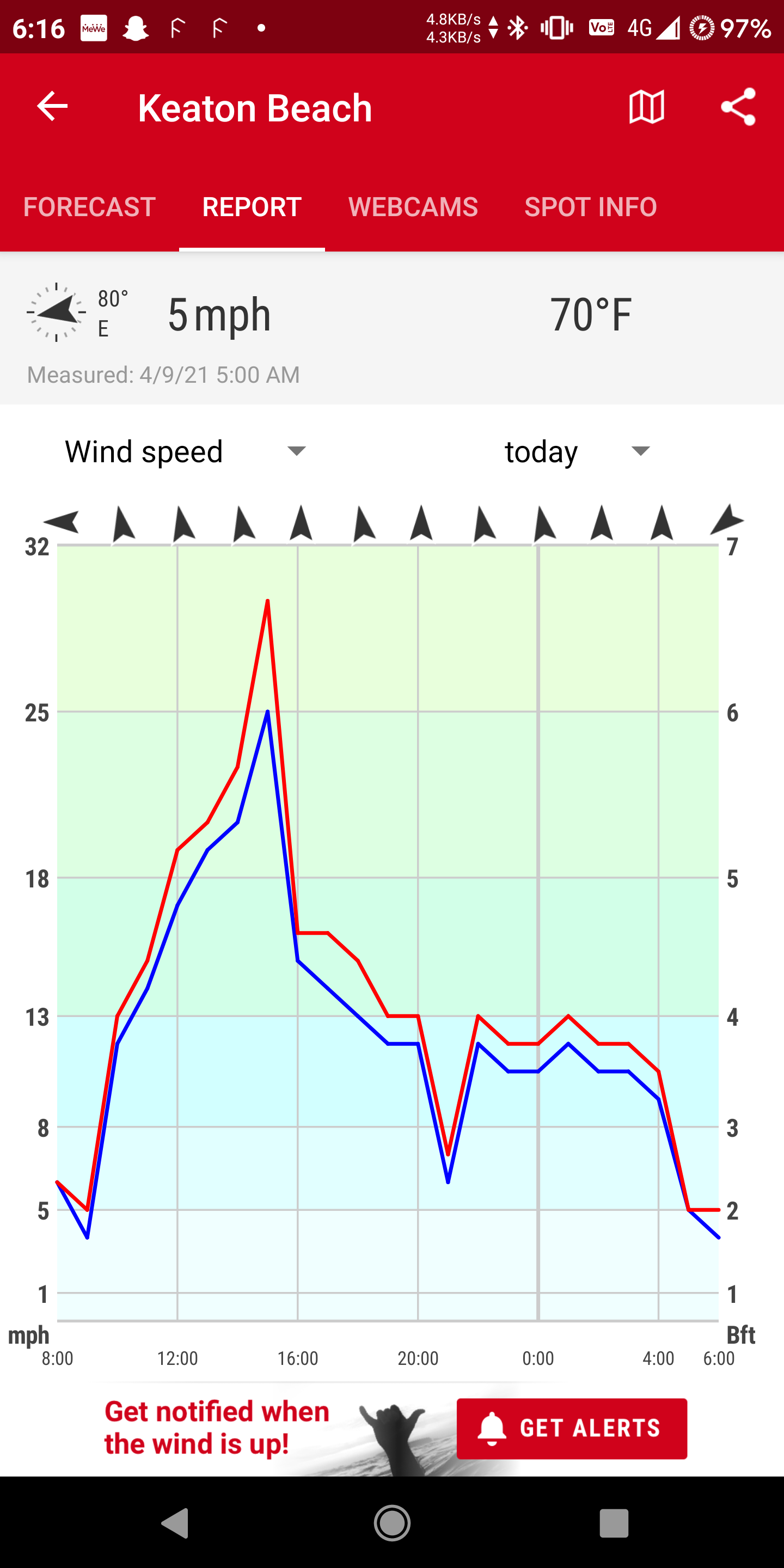 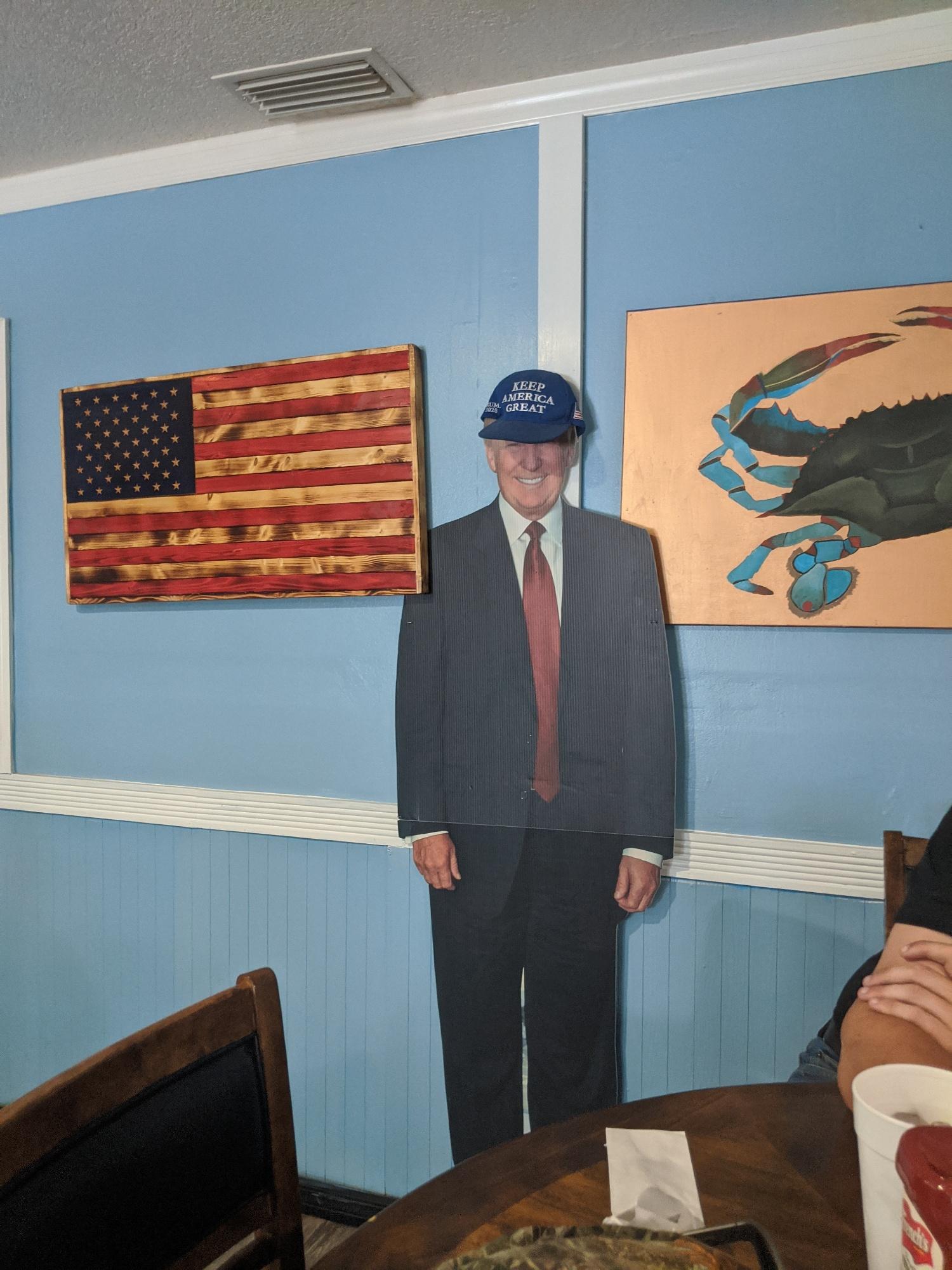 After a restful night's sleep from fiddlers hotel, we headed to the Jena side to use the dixie co landing and we're greeted with much better weather. 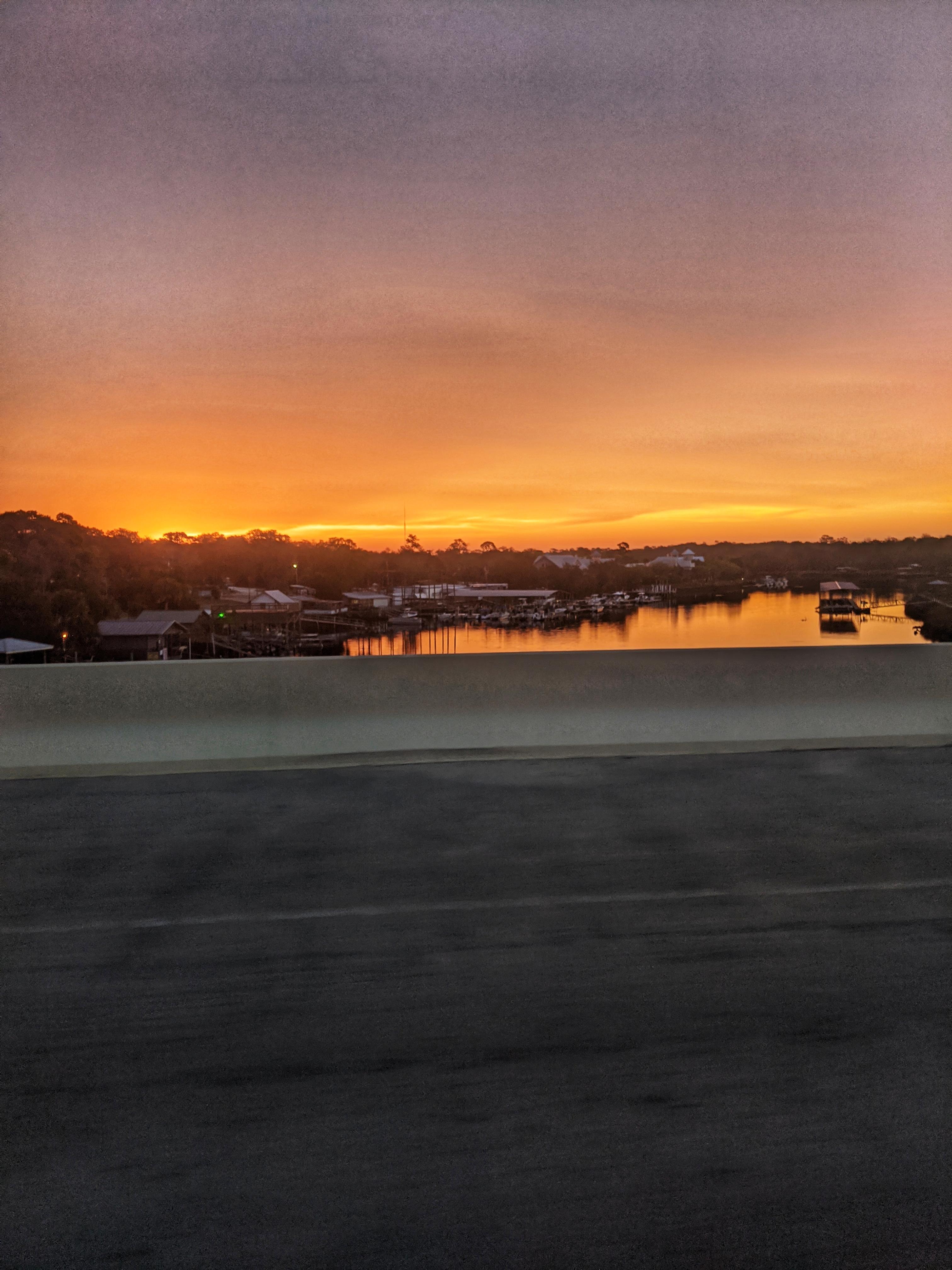 However, our run to pepper fish was severely delayed due to an issue with the outboard which we had to remedy on the way out of the channel. But our due diligence was rewarded and the first cast of the drift netted us a keeper trout. 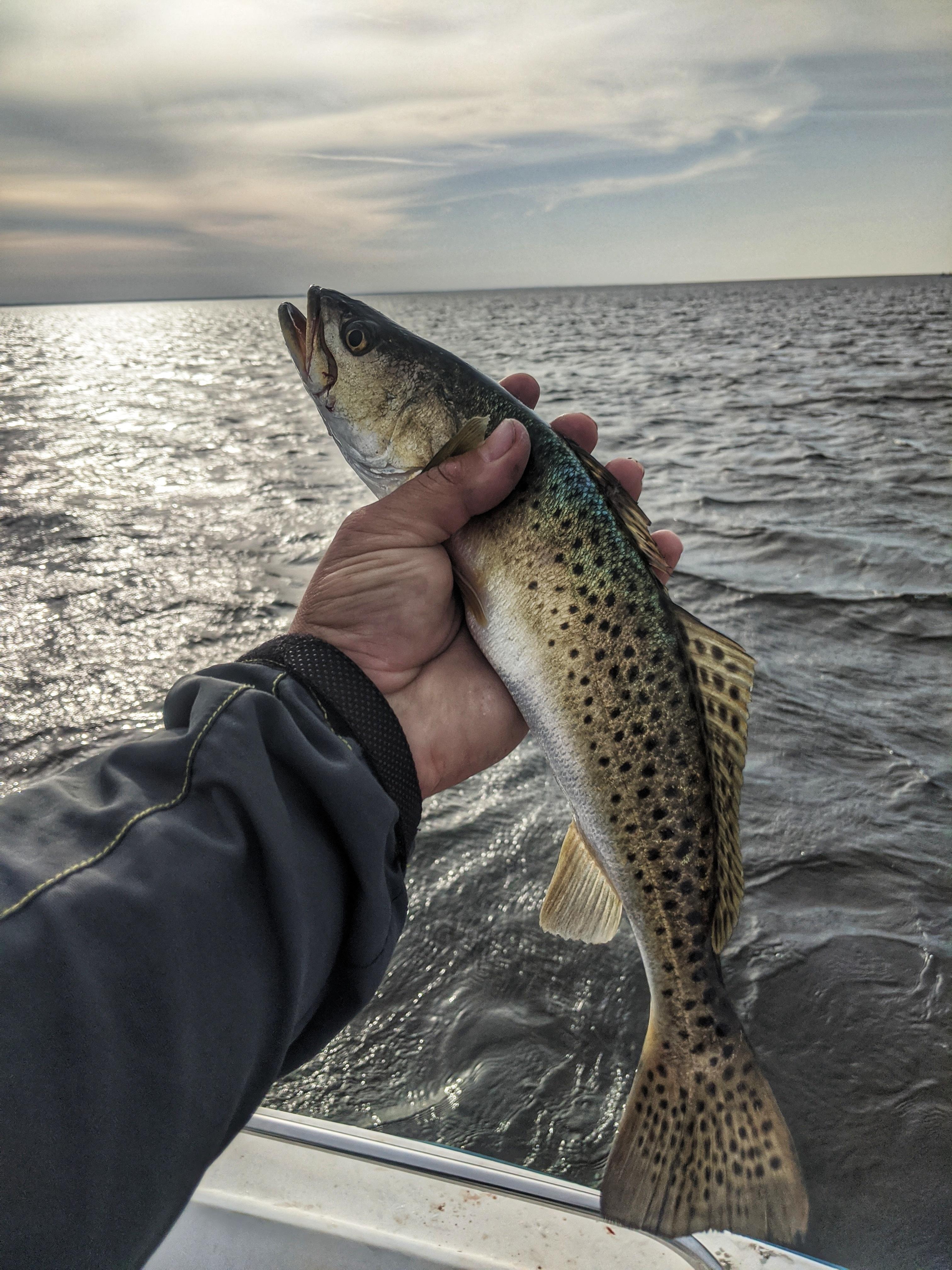 Which had us ready to fish even with the seahag rental boat thinking we must be experts and deciding to try and run us over upon watching us catch said keeper. 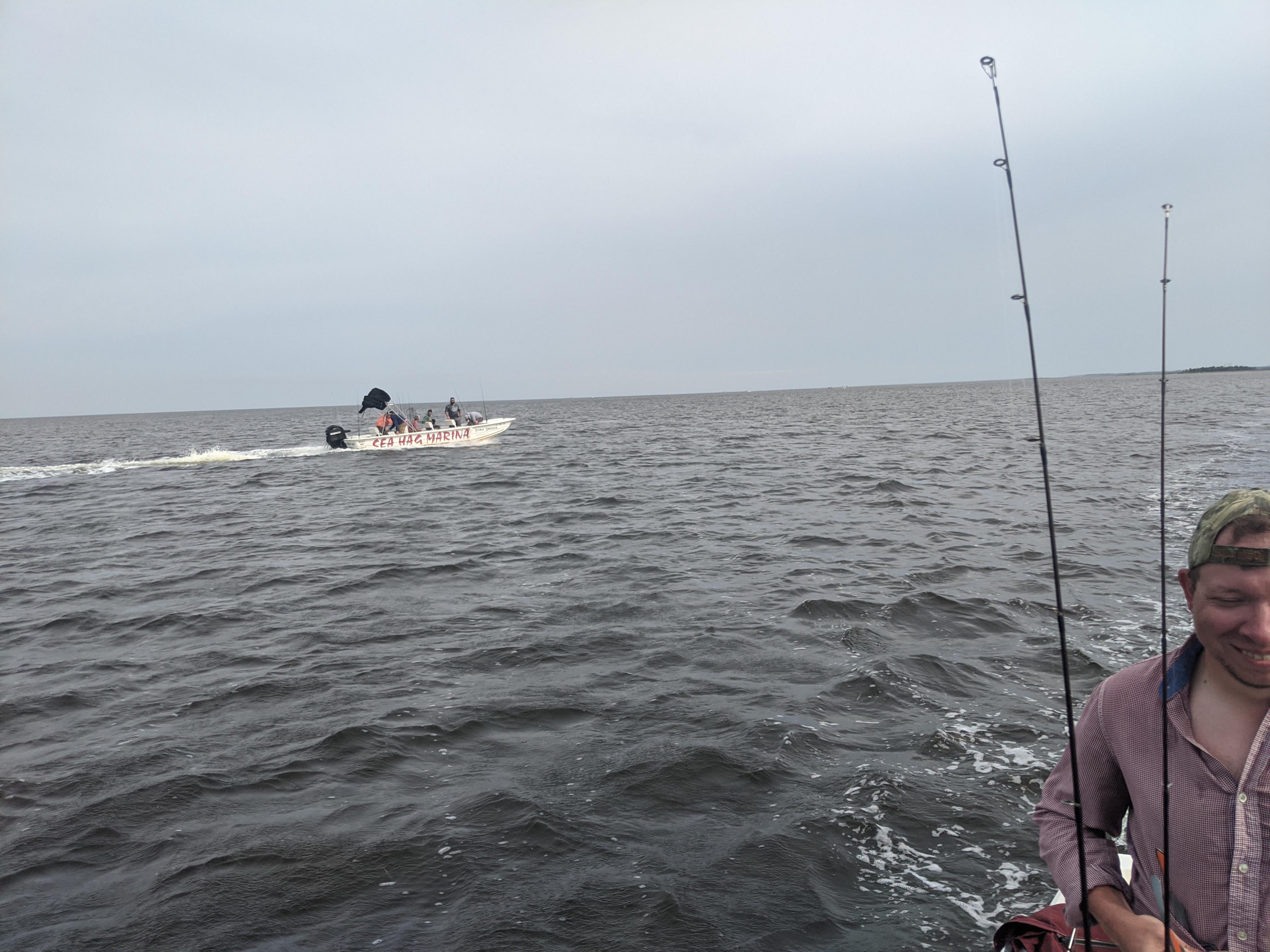 Now if you've read my reports before you may have noticed we tend to make the best of things and since we went from using a boat with a trolling motor to one without, I improvised. 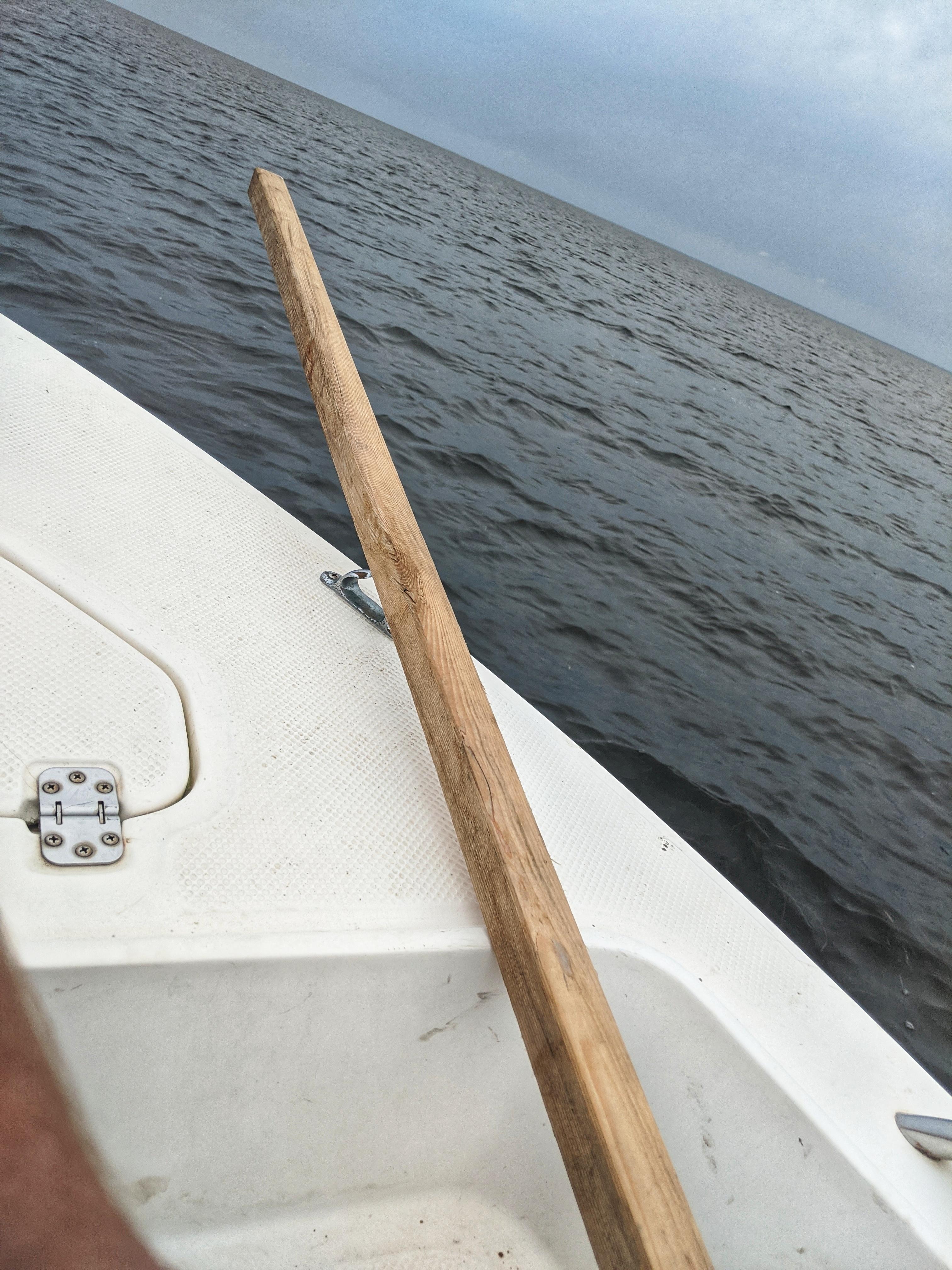 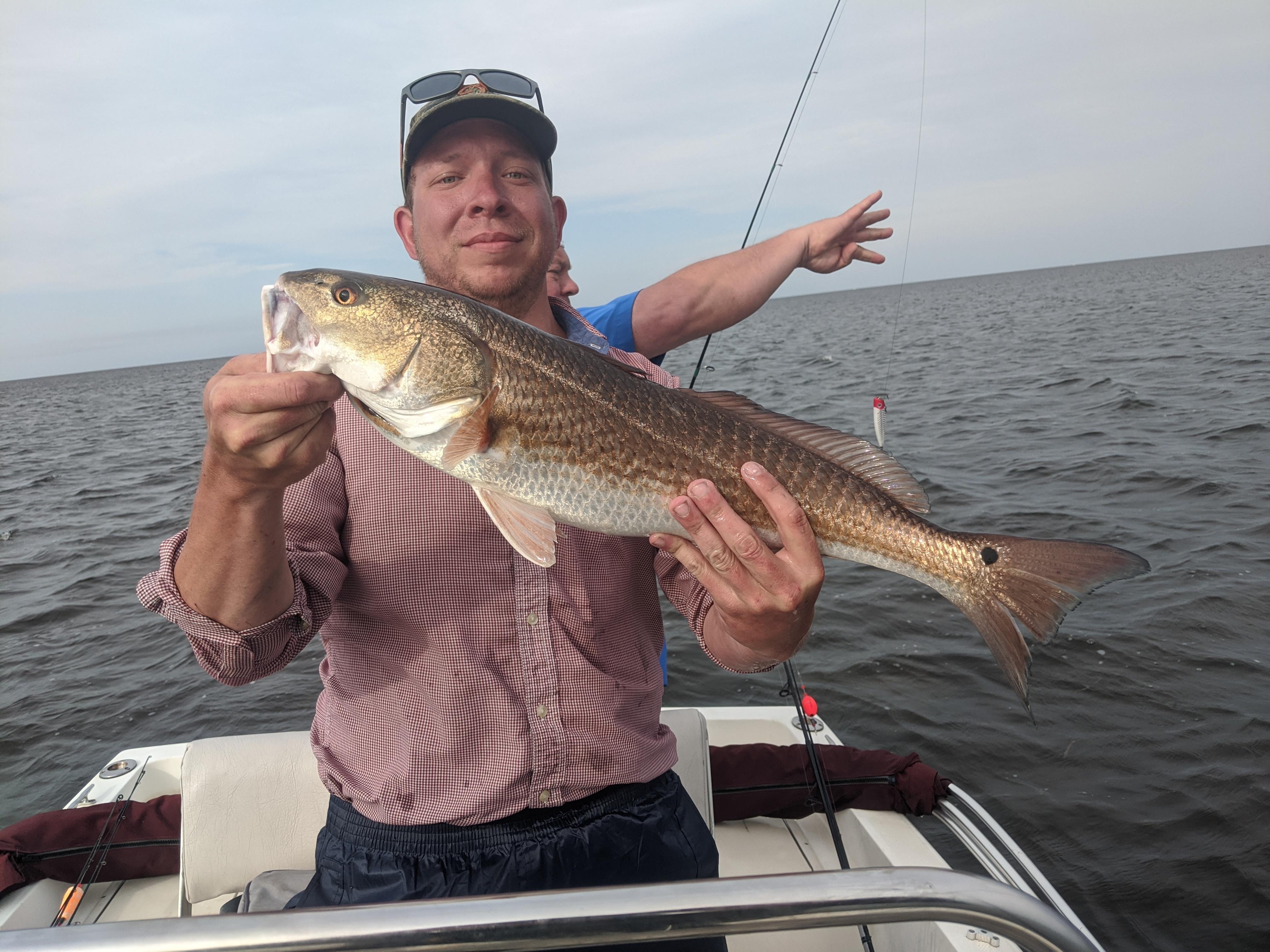 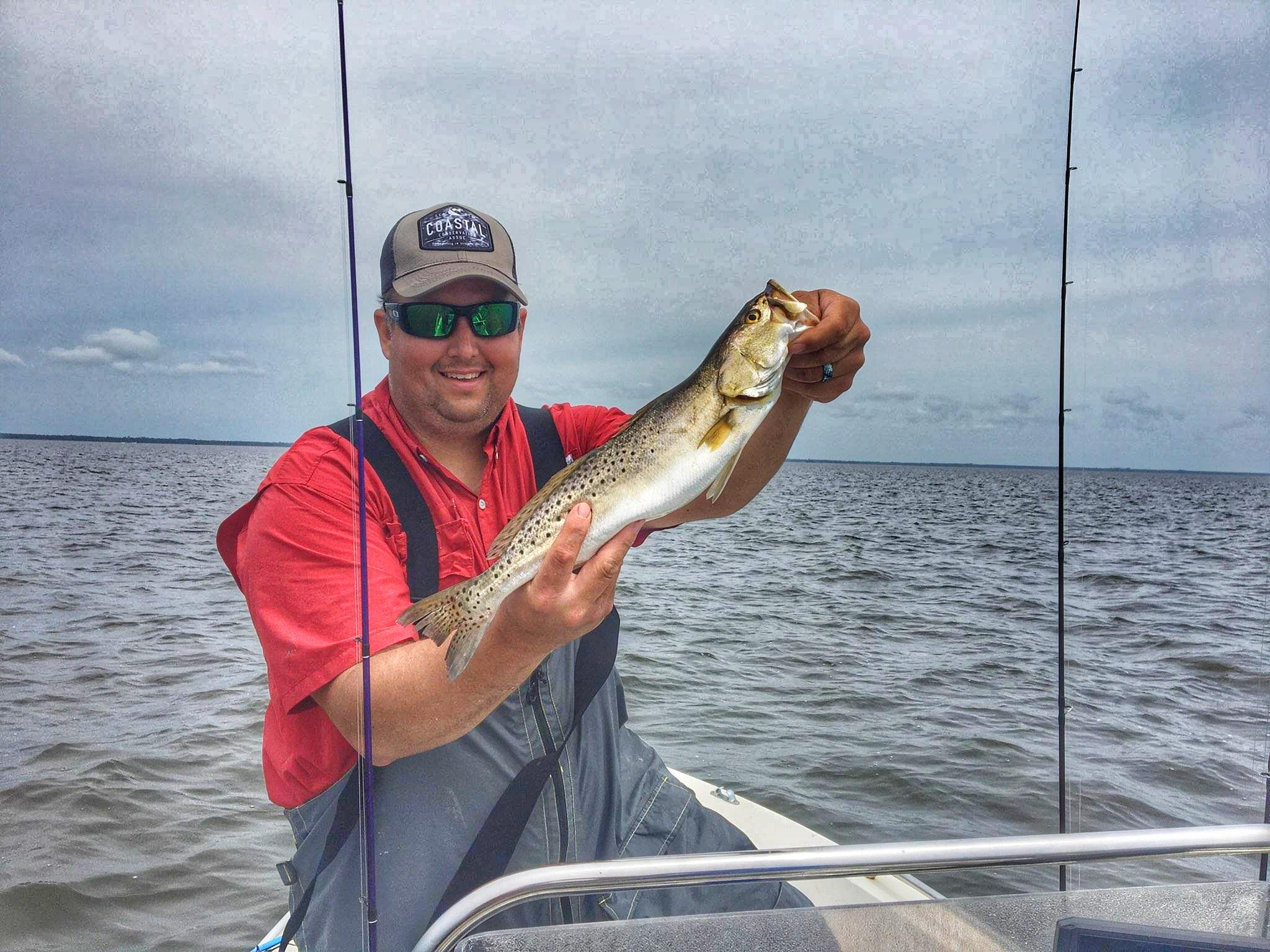 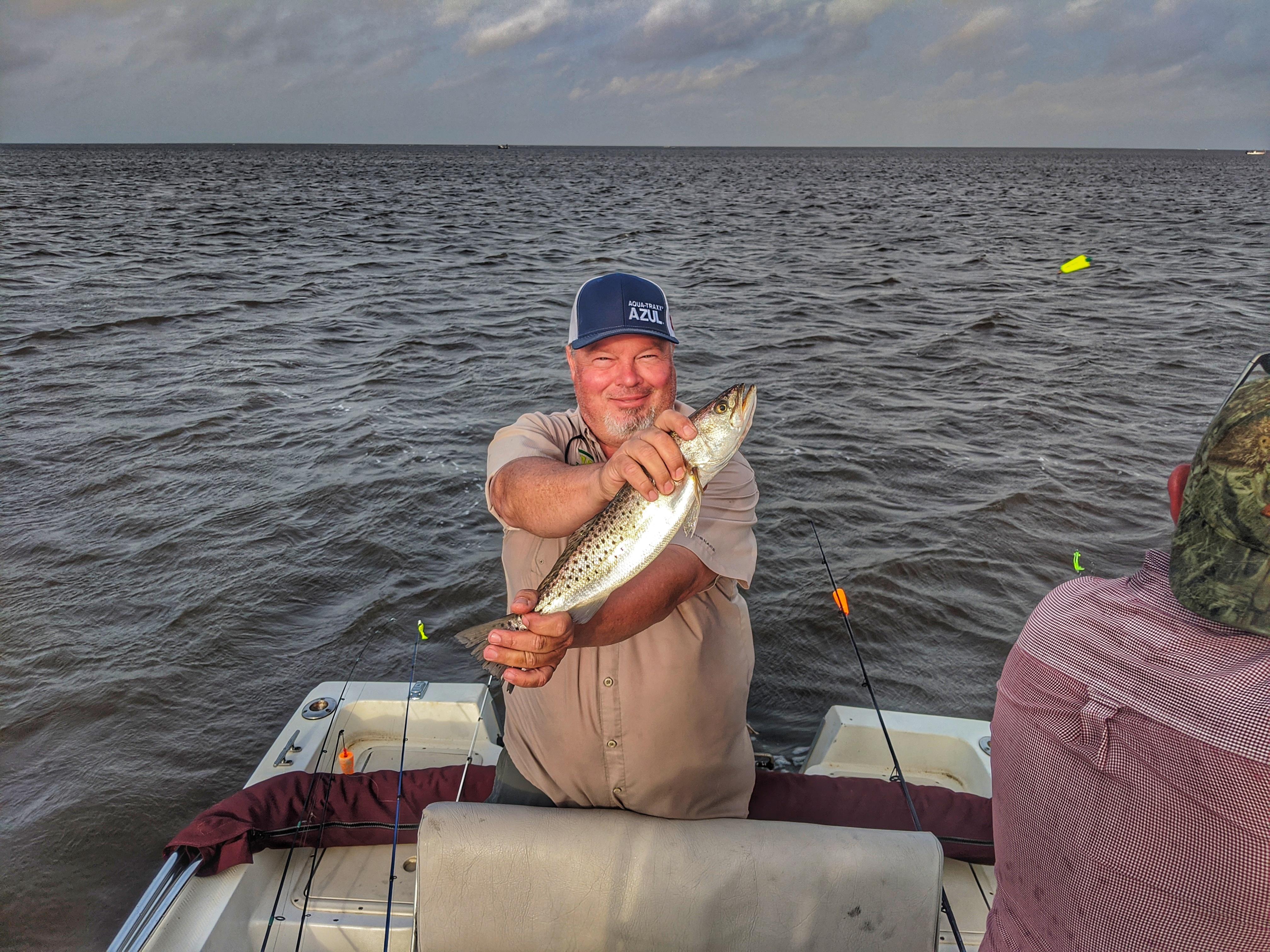 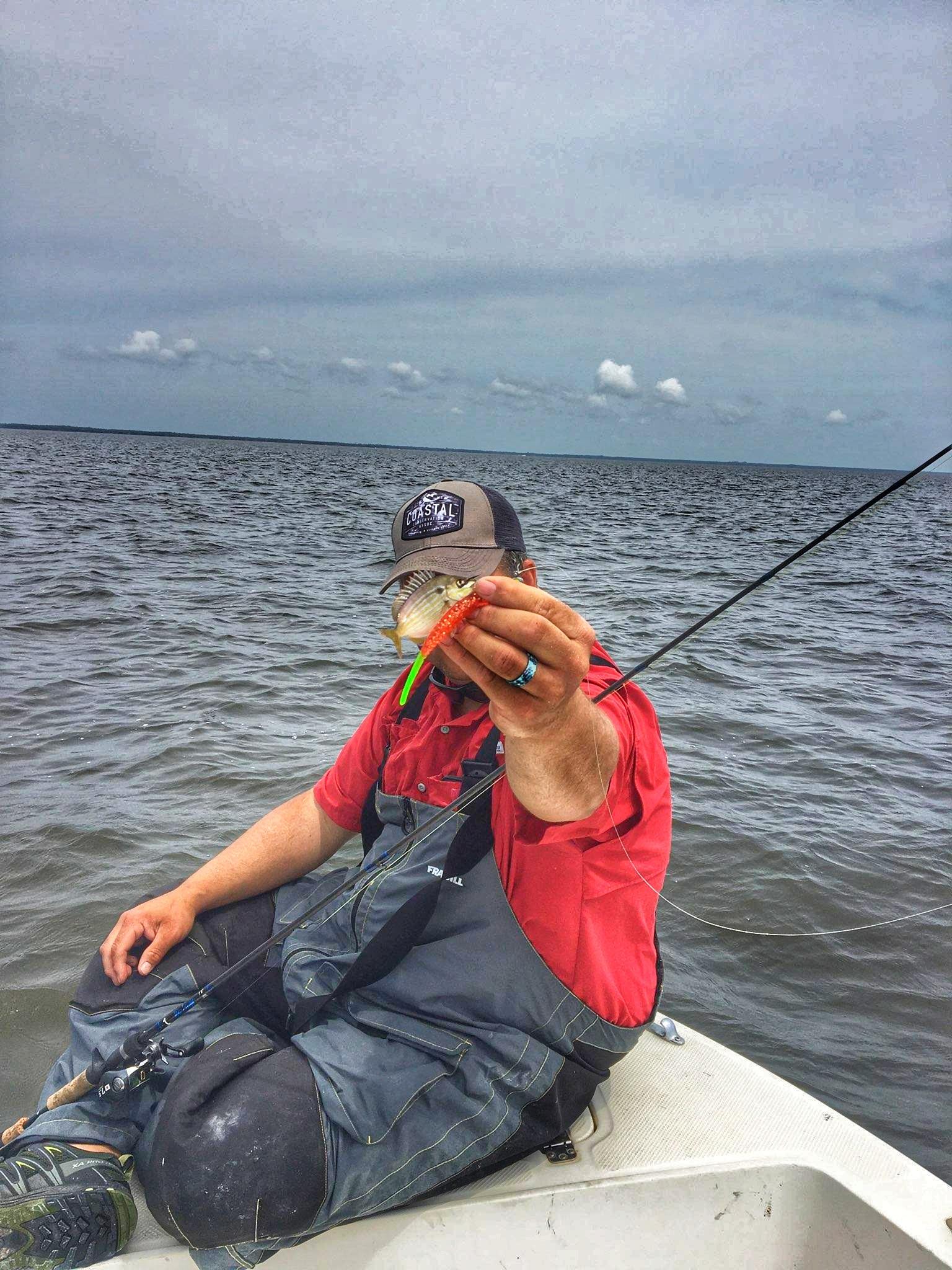 By 2 o'clock we had our limit and headed to chase more reds with no luck in bull cove, and then headed to try and find some Spanish. We found nothing but blue runners, bluefish, and of course ladyfish. So at 4 we called it a day and headed in to feast upon the fiddlers buffet since we had skipped lunch. Brittney G took excellent care of us and she earned her nice tip that night with us leaving to clean fish feeling very stuffed. 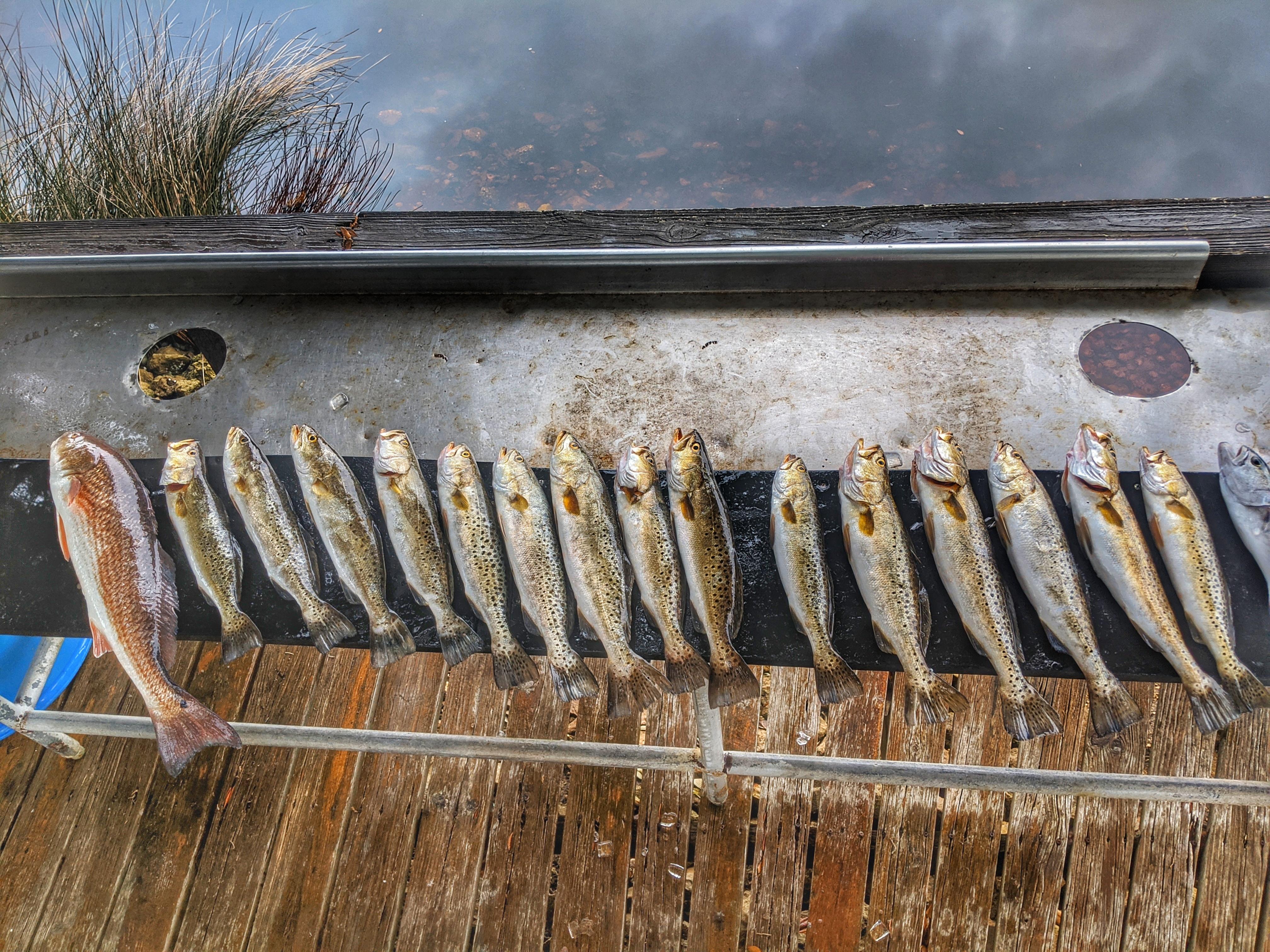 The next morning we were back to the windy weather and more boat tinkering in the channel which led to us passing boats coming back in that came by us while we were tinkering. Quite a few boats didn't want to deal with the waves and wind. 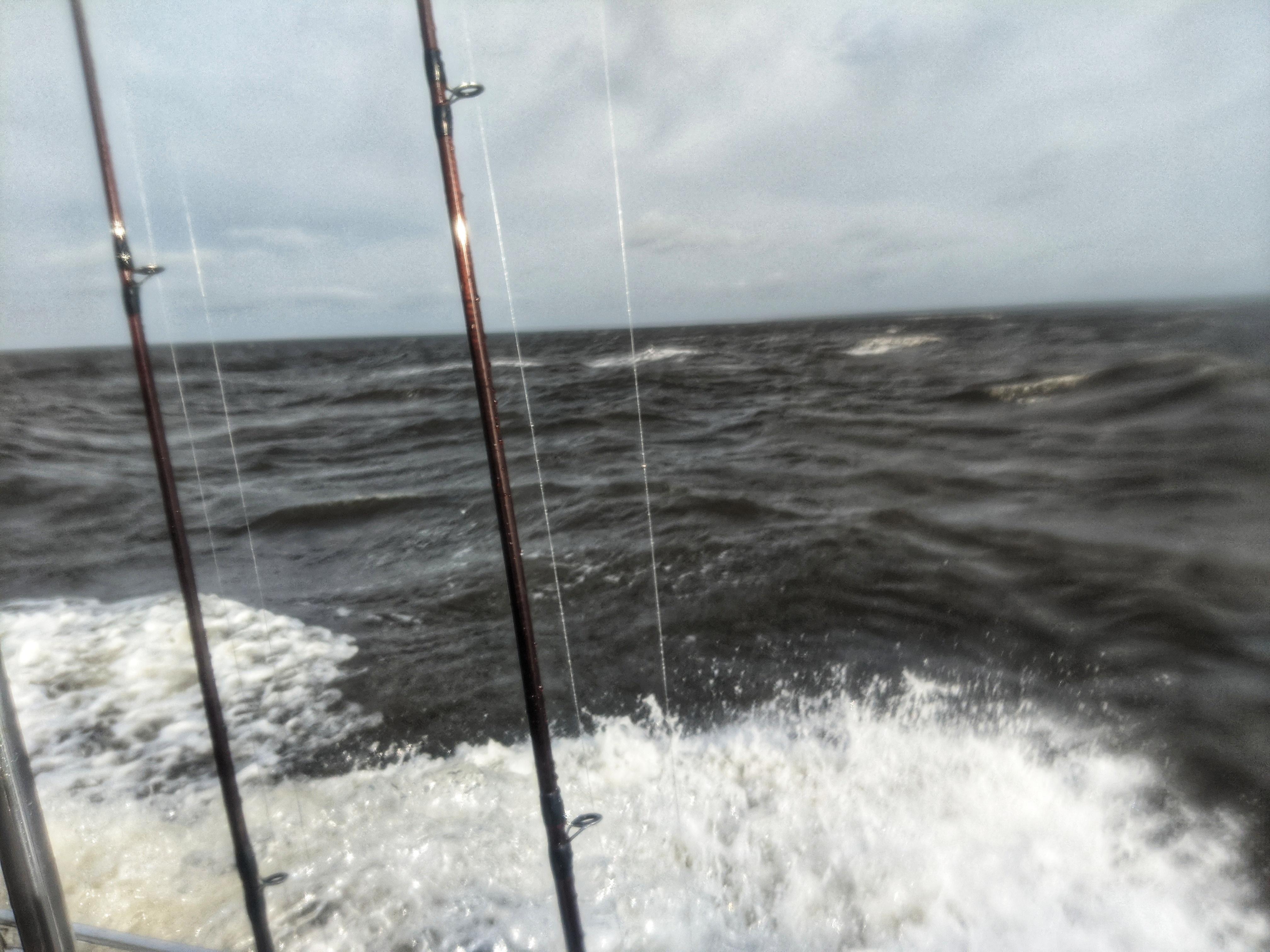 I don't blame them and we made the mistake of running north, we were greeted by waves, wind, muddy water and floating grass. We picked up a few trout and called it day. Apparently the waves weren't as bad north in Keaton but we had a 3 hour drive and left by lunch after another great meal from Kathi's. Can't ever complain about a trip that ends up with a plug that needs new hooks. 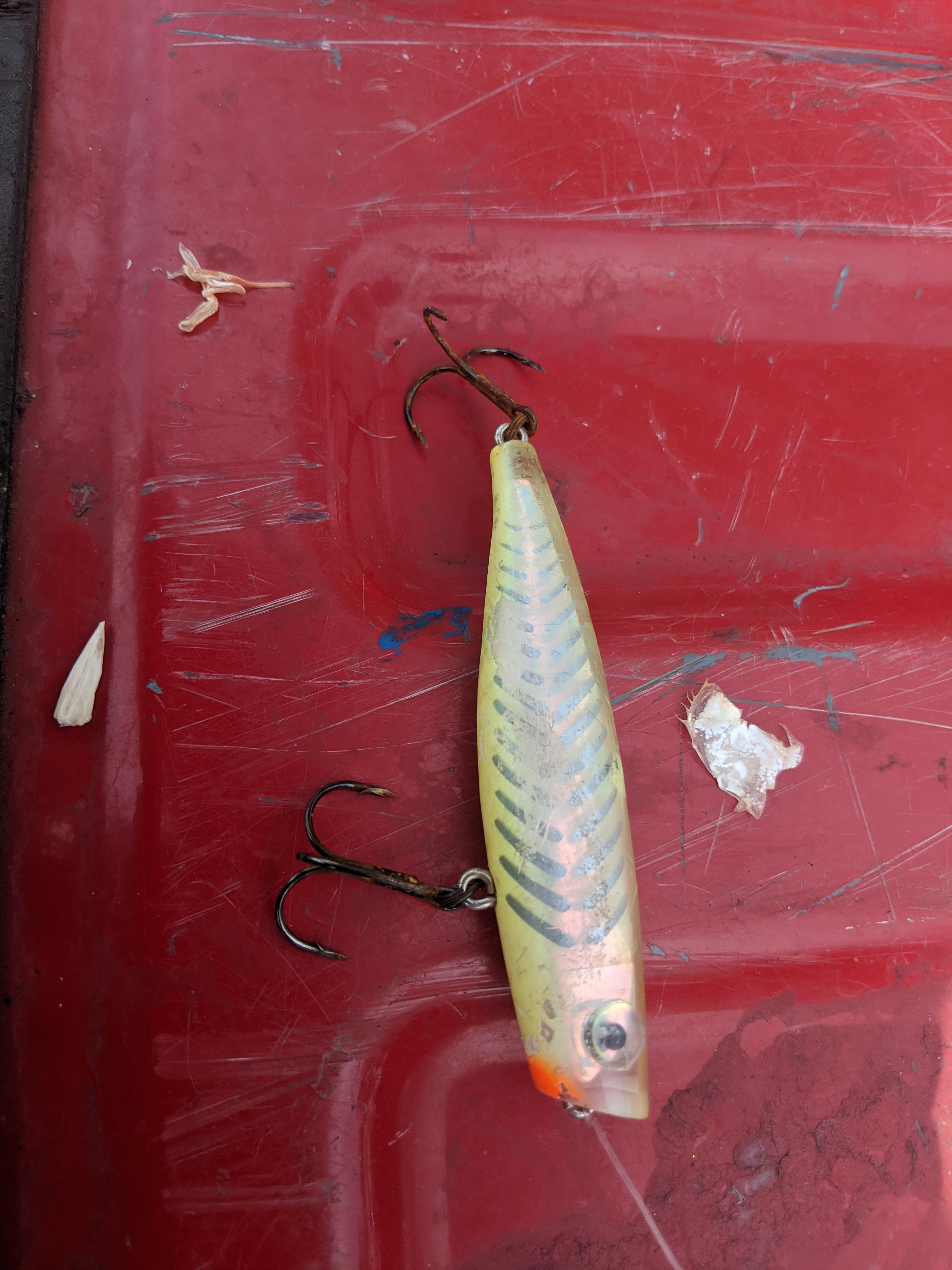 Or the fine vittles from a mess of trout 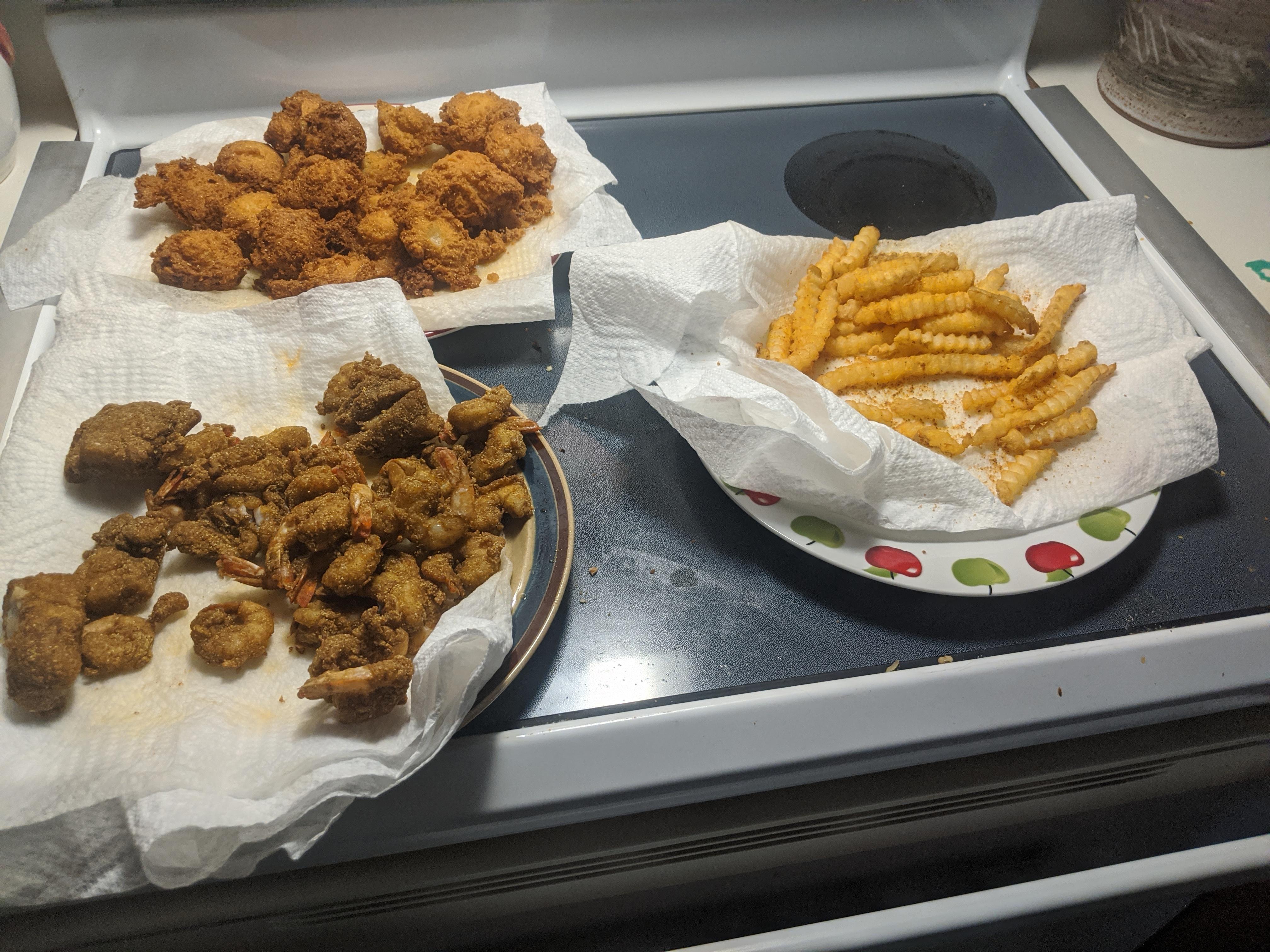 On a sidenote, steinhatchee fish company has some great seafood, the shrimp they had on special made for a great meal tonight as well. 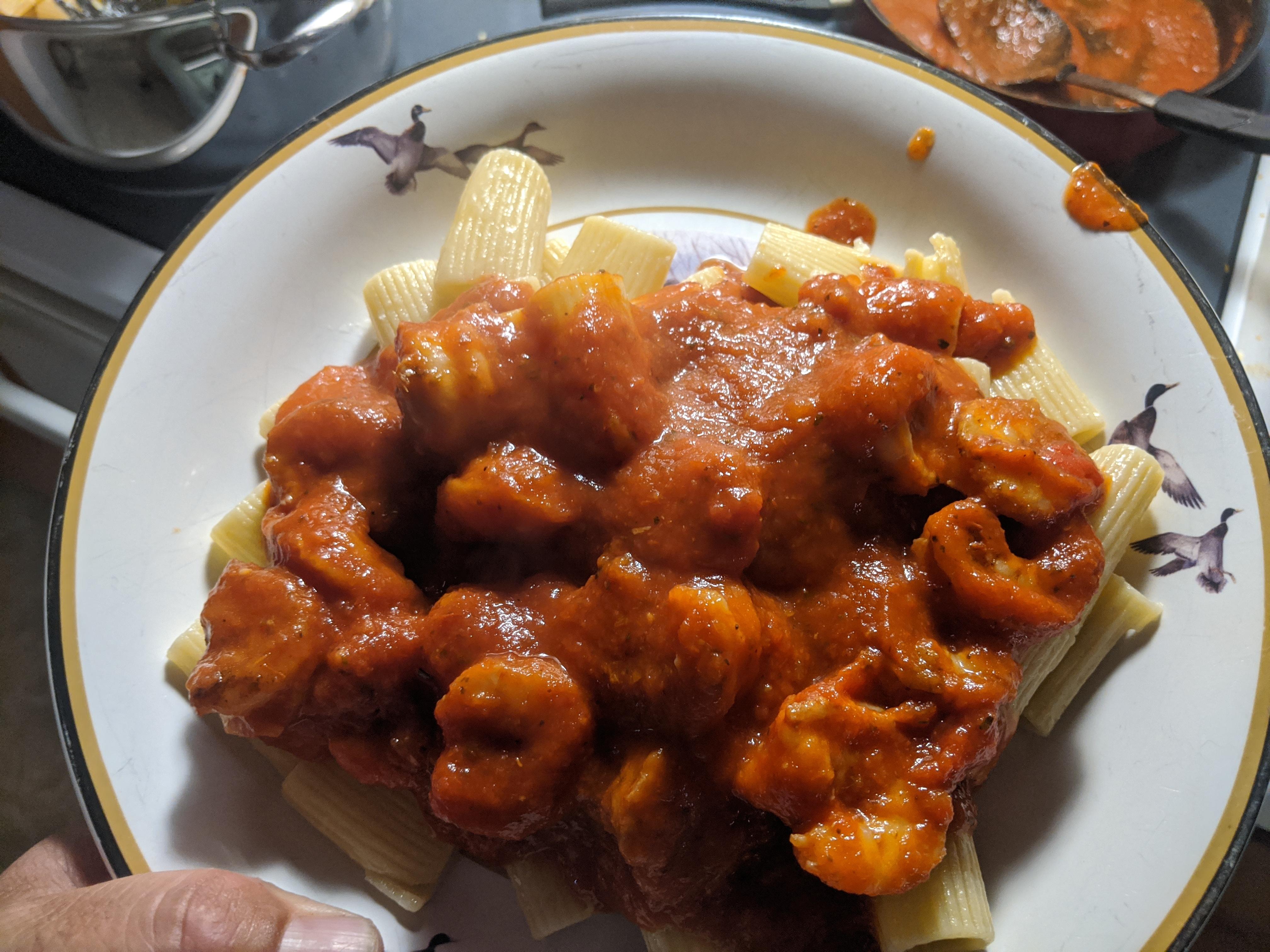 So for the tldr version, the trout all came on iguana daiquiri trout tricks or bone colored lucky craft sammy's in 4-5ft, with the majority coming on the trout tricks. Nothing else did very well, and the water was clearer south of the river versus north of the river. The floating grass was also much worse north.

Nice report and pics. Think your wife was looking out for you. She new you needed to burn off a few calories before all that fine eating.
Top

Very nice report. Looks like a lot of fun was had. Thanks for posting.

What is that last pic? Looks delicious.

What is that last pic? Looks delicious.

I got key west shrimp from steinhatchee fish co and sauteed them in garlic, butter, olive oil, and old bay and then put them over rigatoni with marinara.

Well that report was...unique lol! Took many hook and turns lol! I heard the mullet stay baited up off of that Hungy Howies dock. I’ve always wanted to run down there and check that out.
Top

BloodyChamp wrote:Well that report was...unique lol! Took many hook and turns lol! I heard the mullet stay baited up off of that Hungy Howies dock. I’ve always wanted to run down there and check that out.

Interesting, I may have to try and catch some mullet next time, I also question at times where my life would be if we had had social media when I was 16 to 18, I'm sure I might have a tv show by now

Great report and photos. Thanks for sharing
Top
Post Reply
8 posts • Page 1 of 1