With our only planned delay in getting on the water Friday being a sales meeting at 8oclock, we got on the way with good vibes 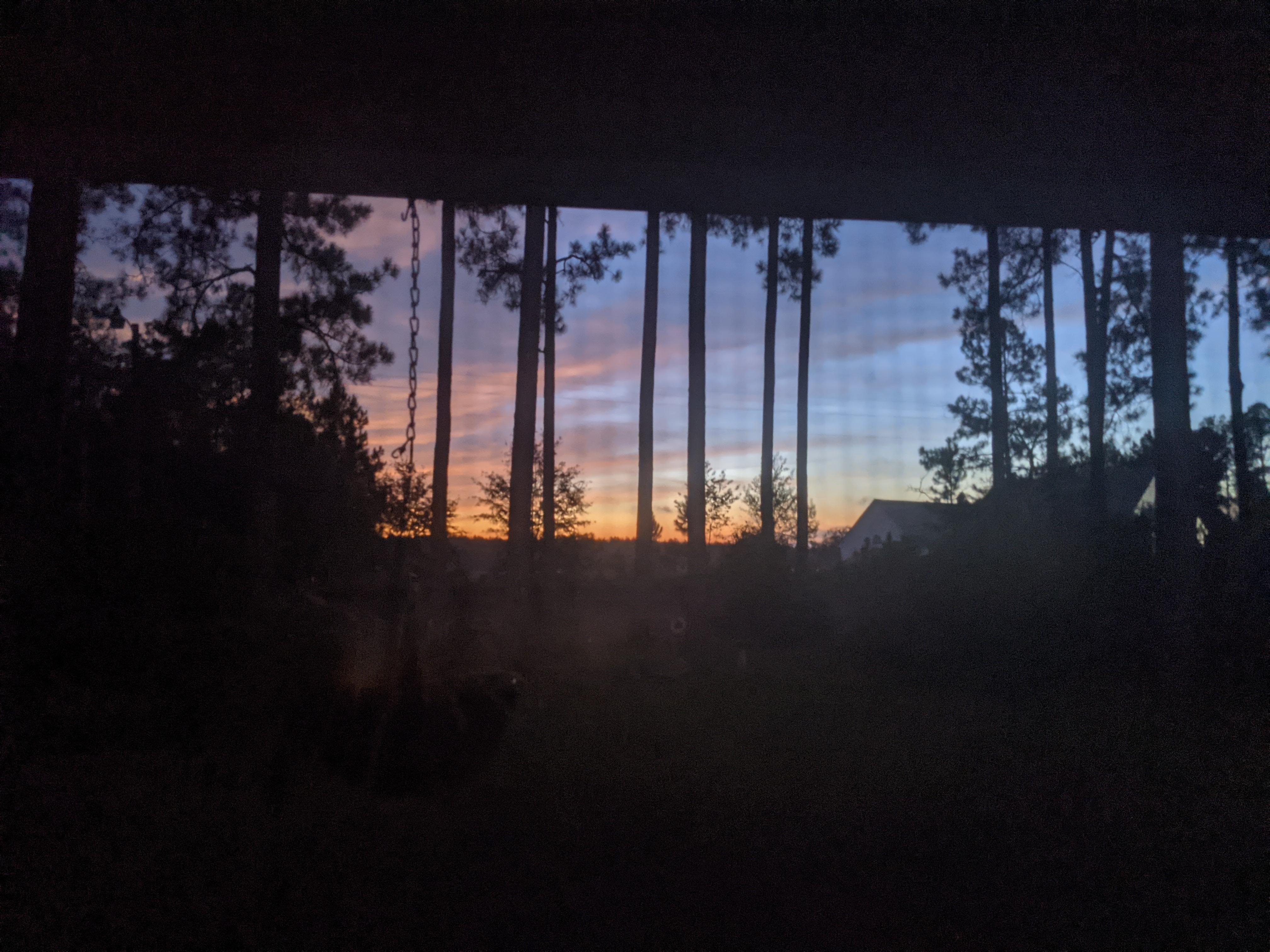 We didn't even let a blow out in waukeenah get our spirits down even though we had to scavenge to get the jack high enough to change the tire. 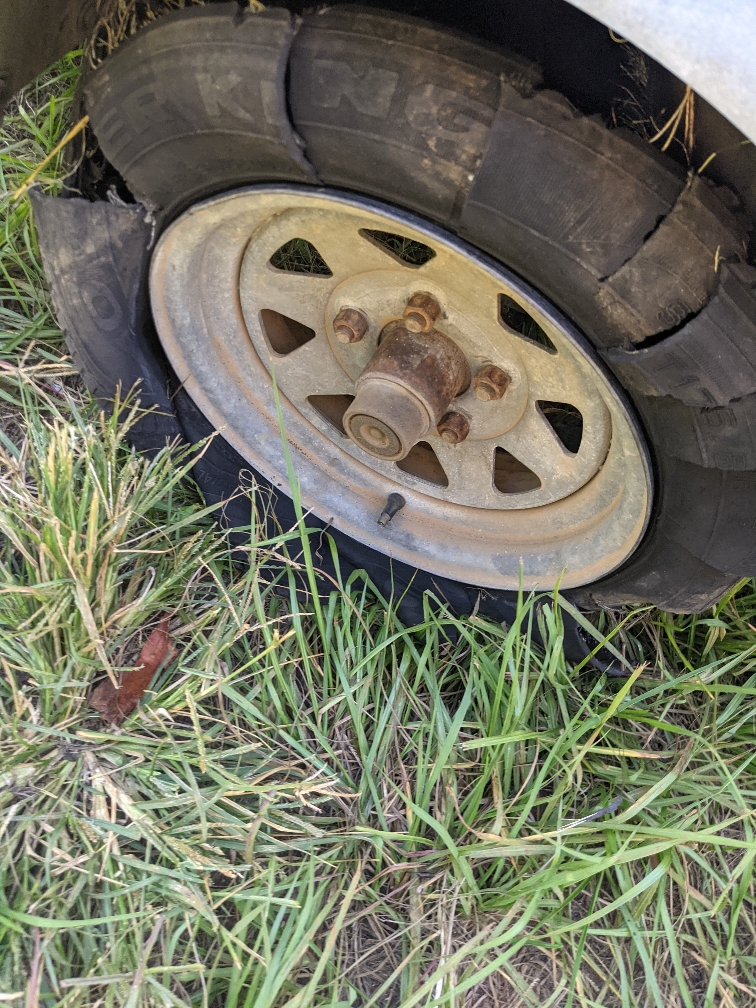 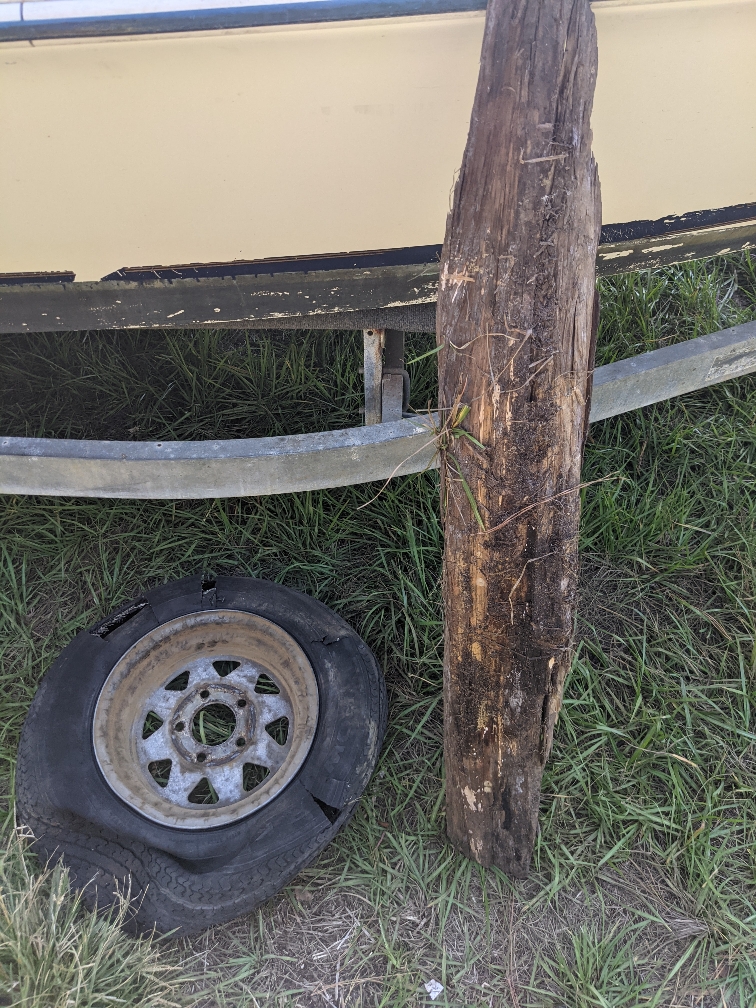 We also settled the age old debate whether size matters cause my spare from my bass boat definitely was too big for the fender. 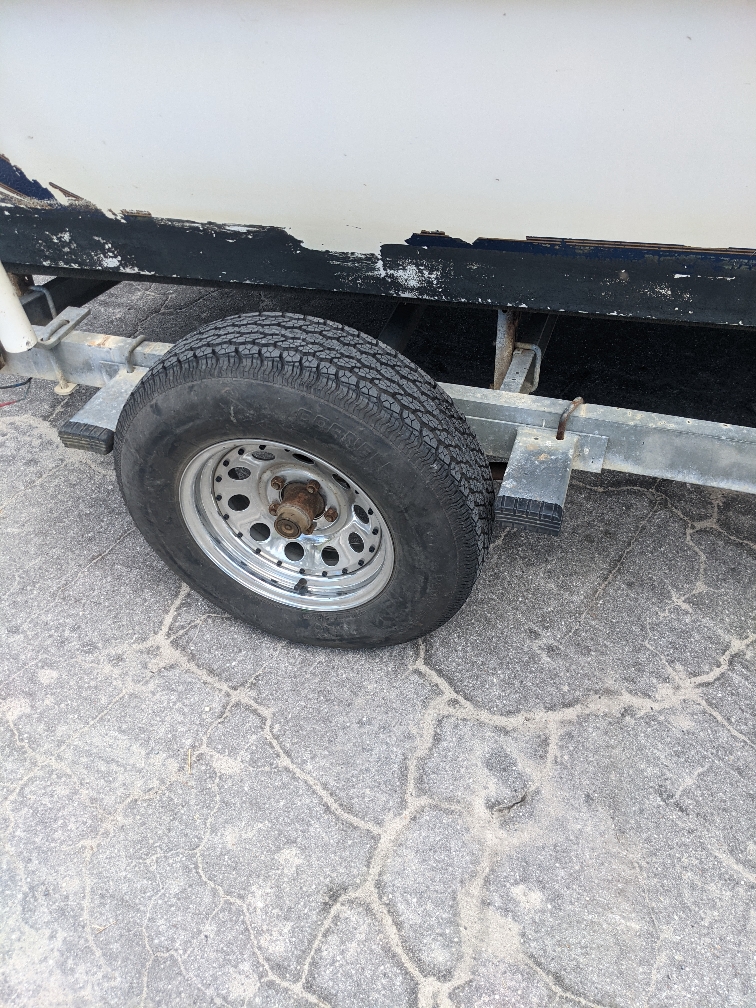 But a quick stop at shields had us took care of and stone crab from riverside had us ready to fish. 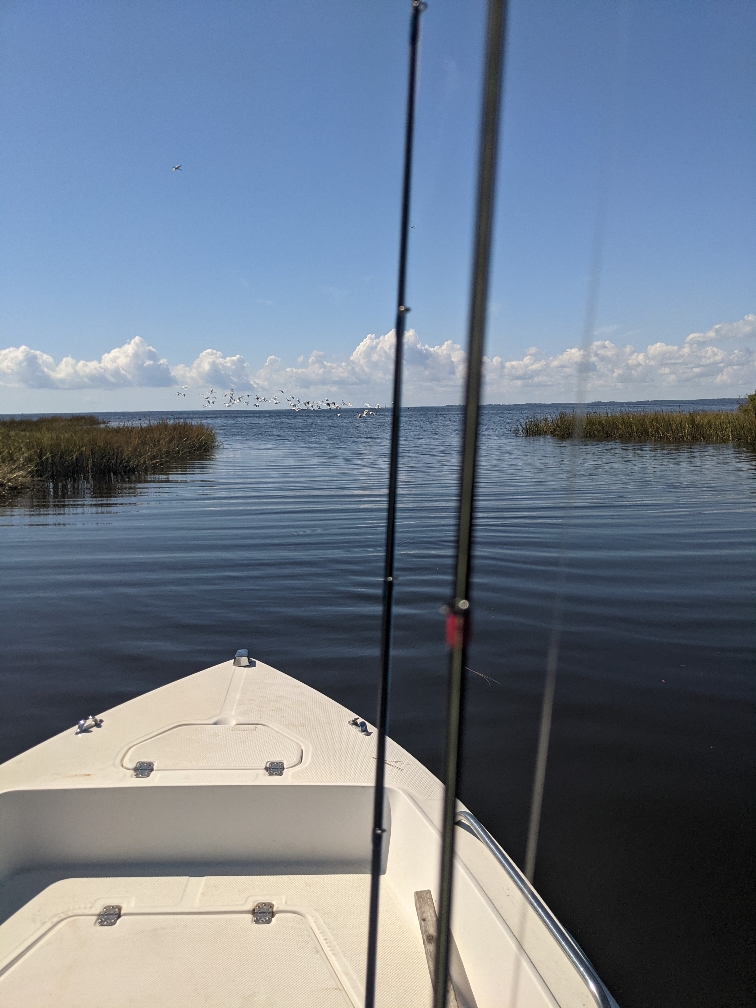 And on the first stop the action came quick 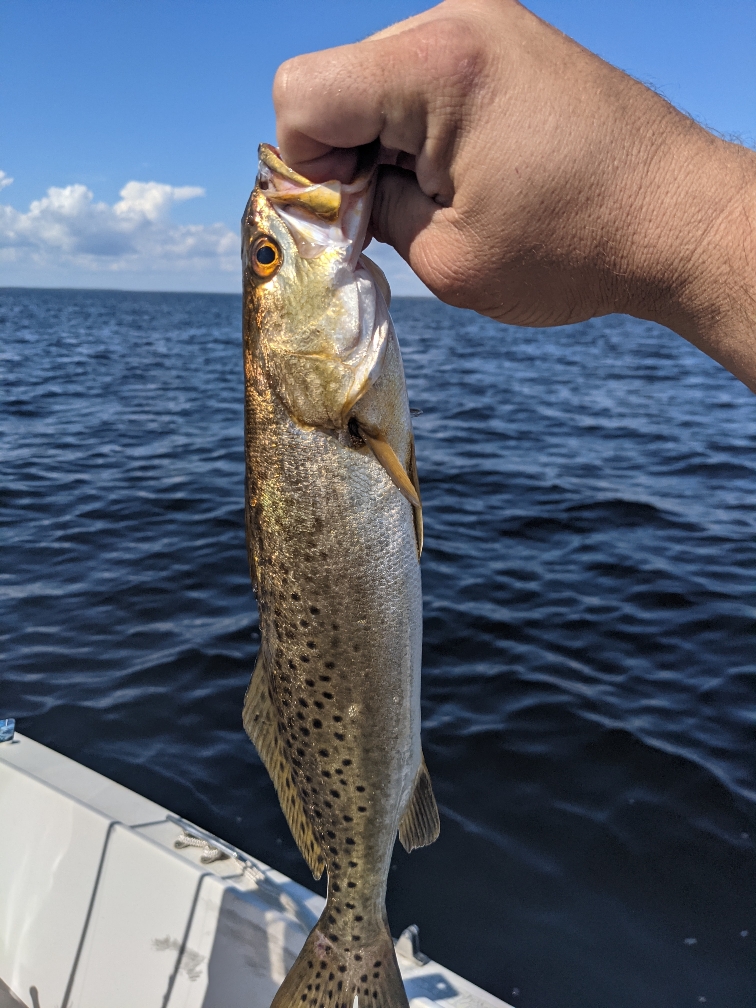 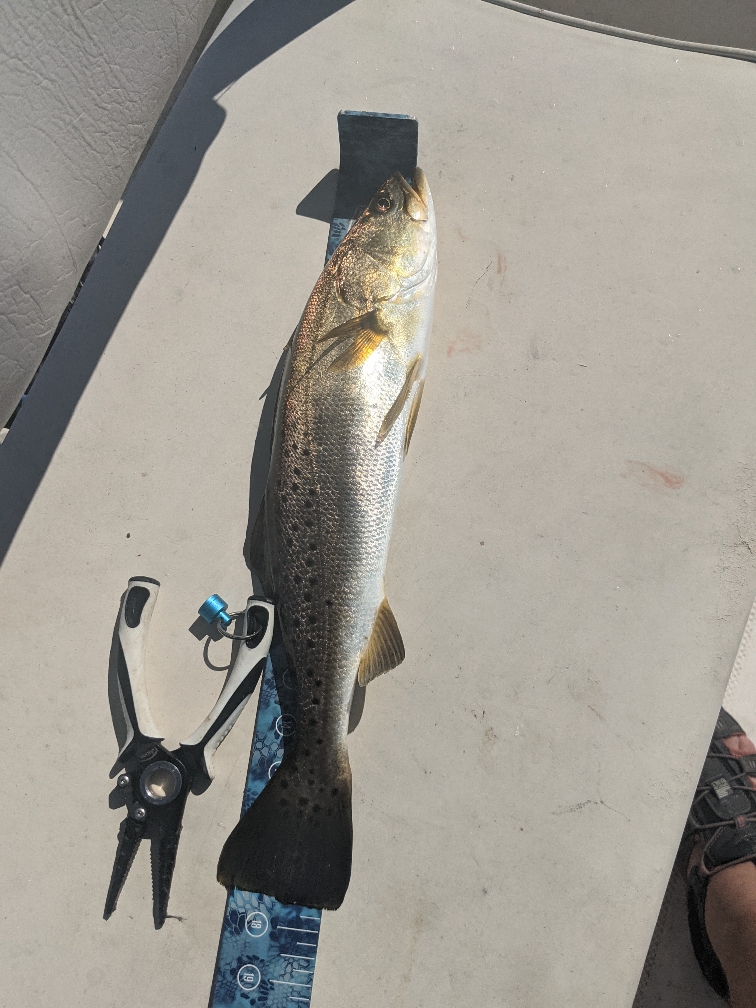 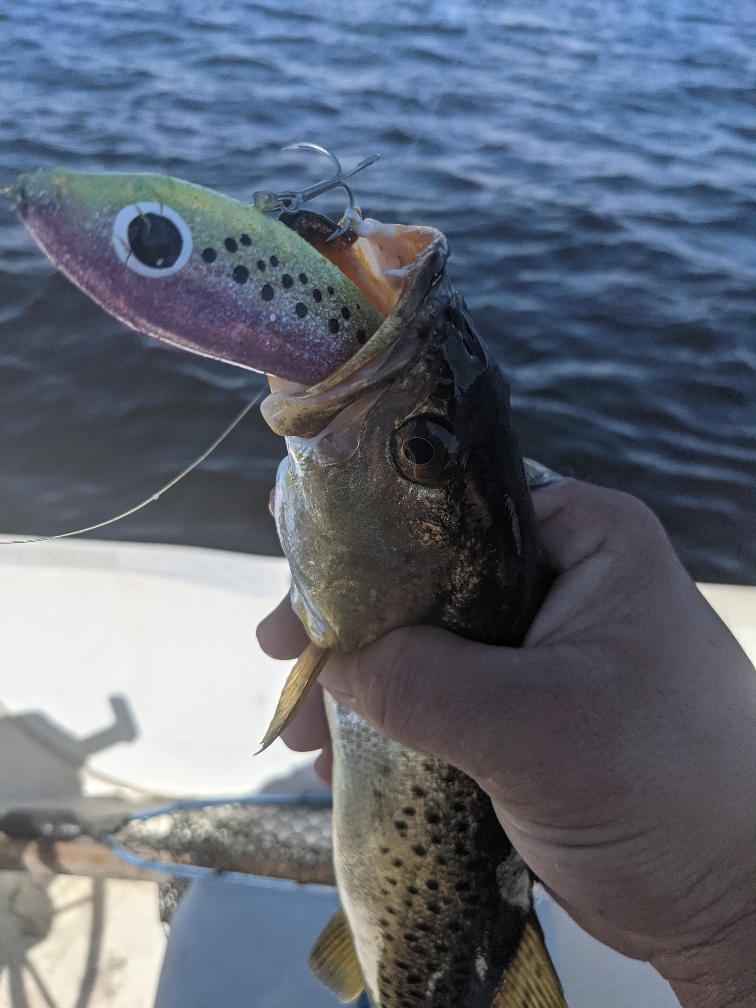 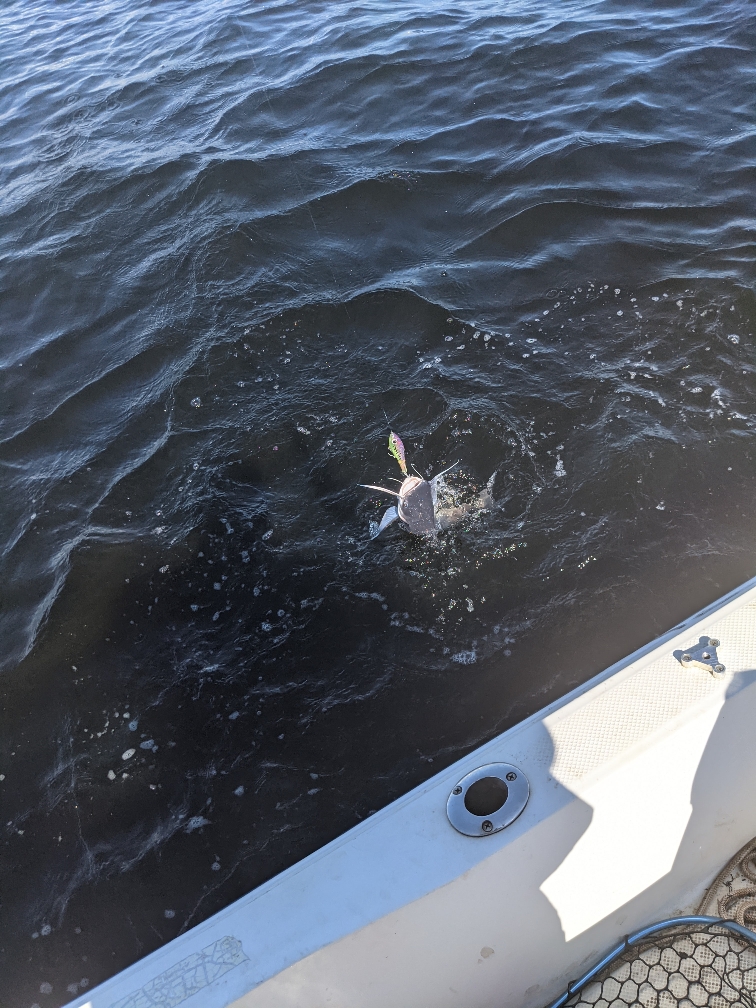 Which led us to temp fate and try for reds behind grey mare which was a folly with horrible floating grass. So we decided to head on down to steinhatchee to get the buffet at fiddlers and our room. 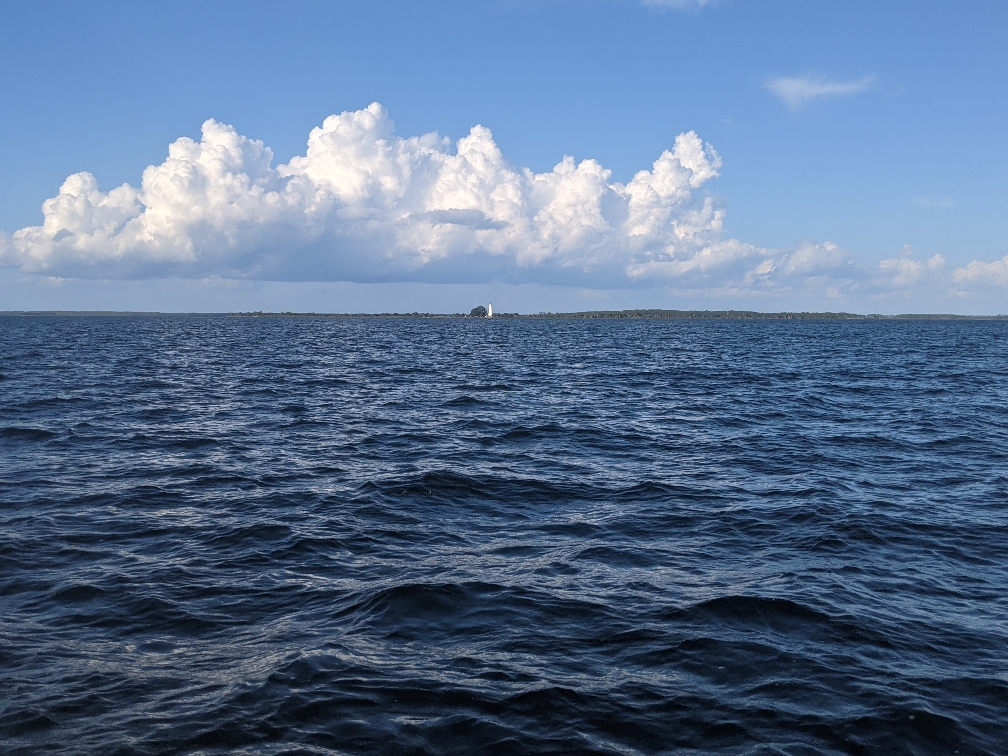 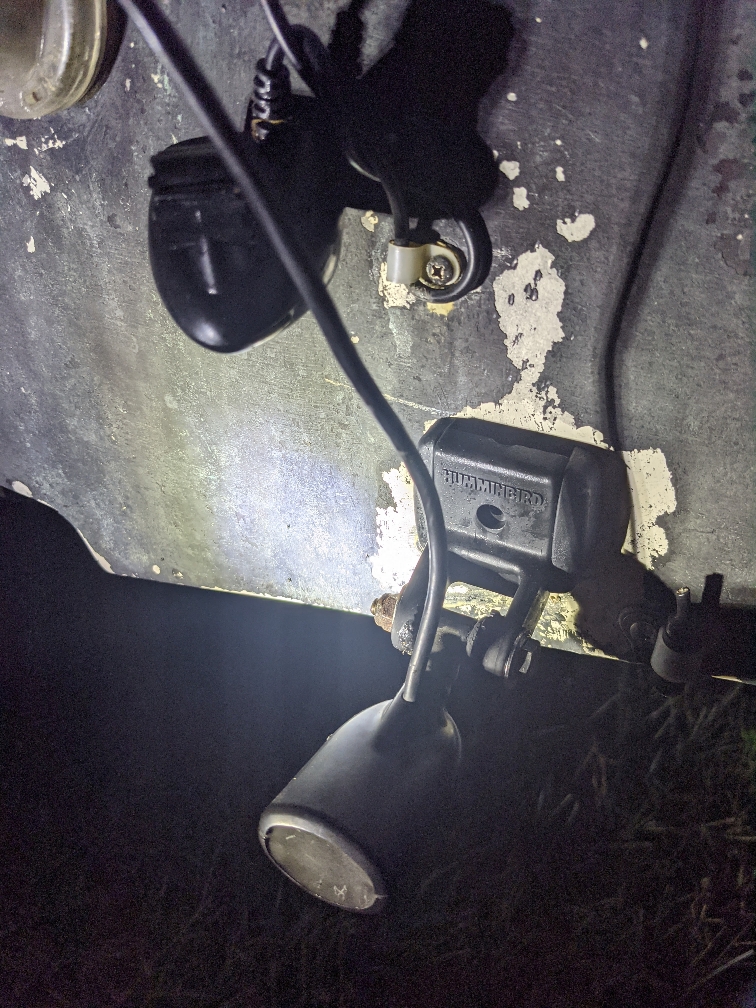 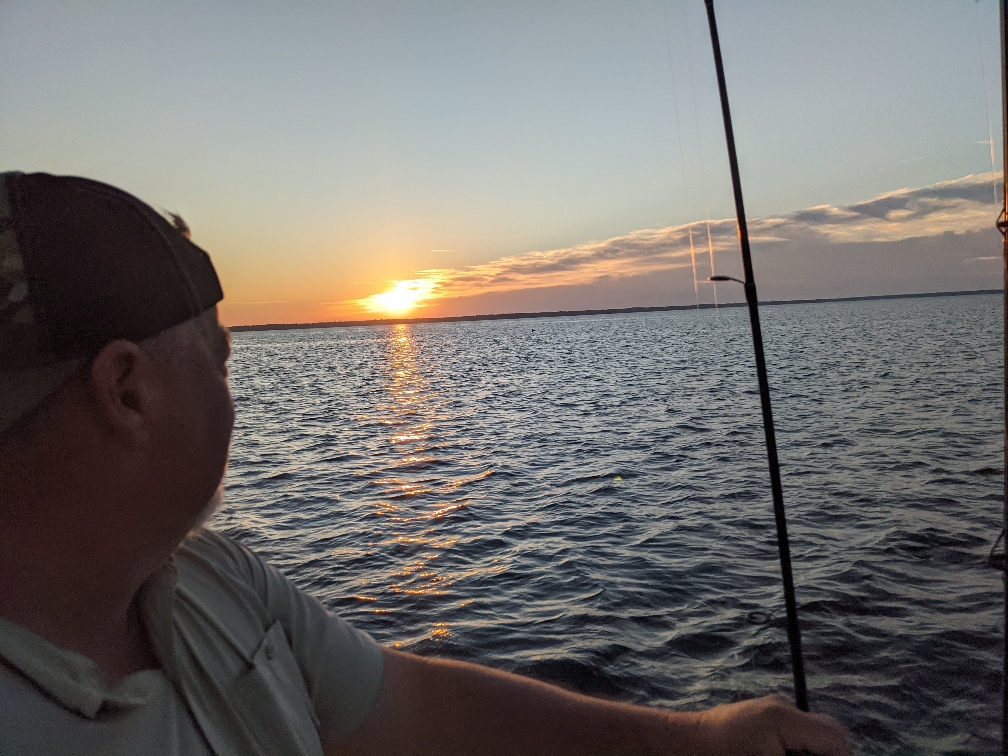 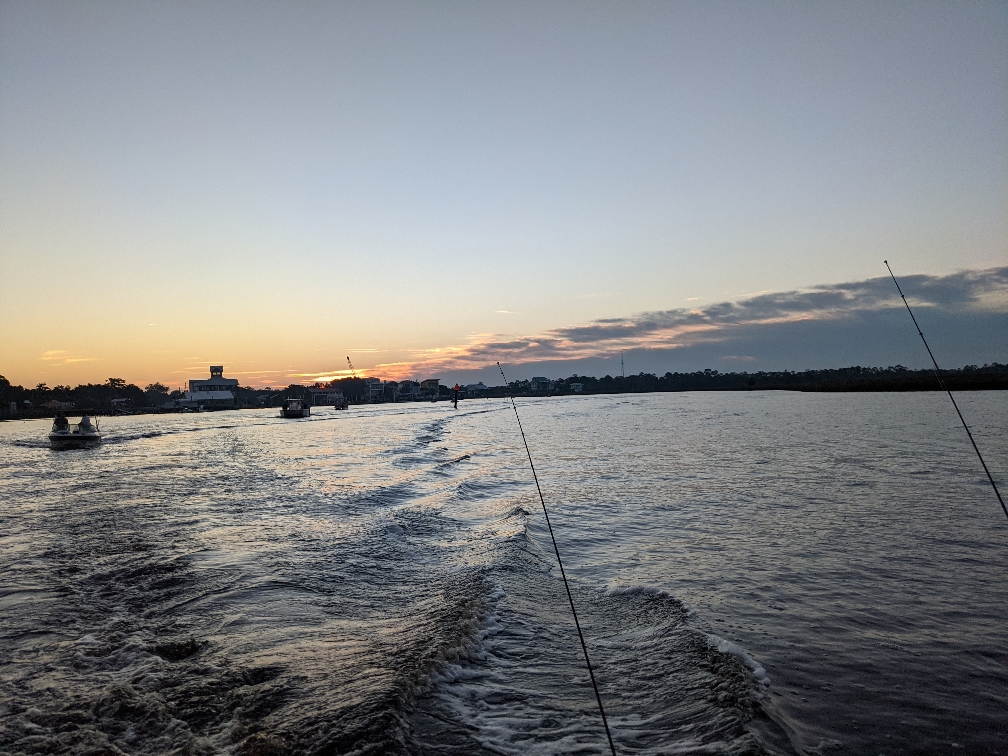 We made the long-run to pepperfish and we were immediately disappointed, horrible floating grass and water that looked the st marks nwr toilets. But we made the most and found an area that was cleaner and I found my fishing luck from the trip before showed up on this trip

I proceeded to catch the first keeper and all the time of yelling Bobby live well from the previous trip hung heavy in the air and it all went downhill from there. 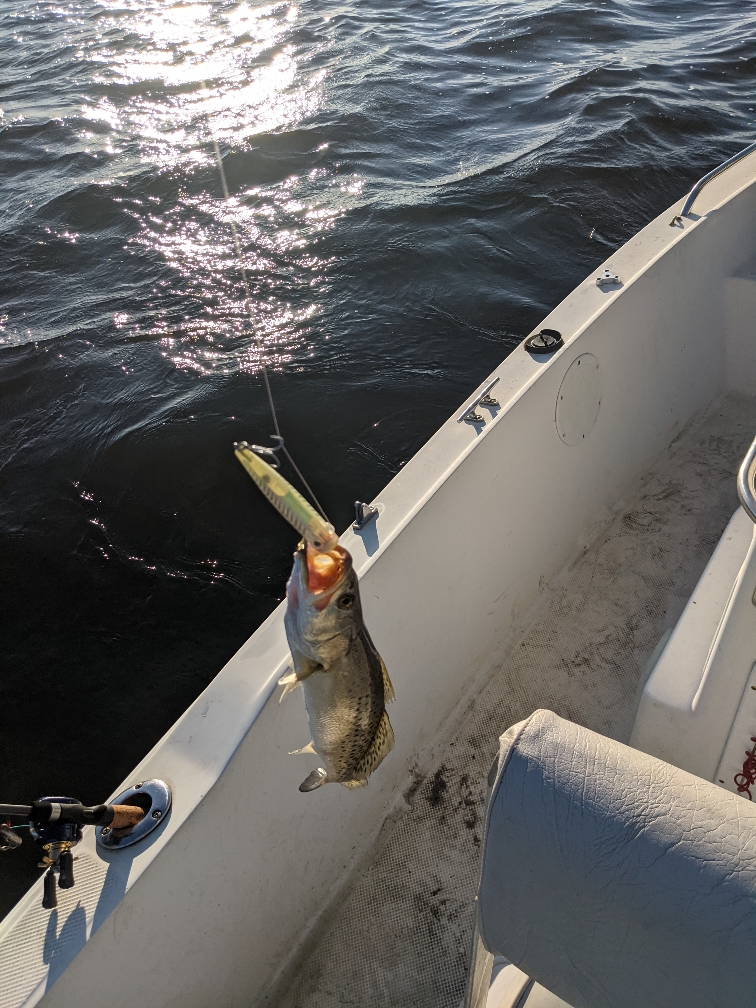 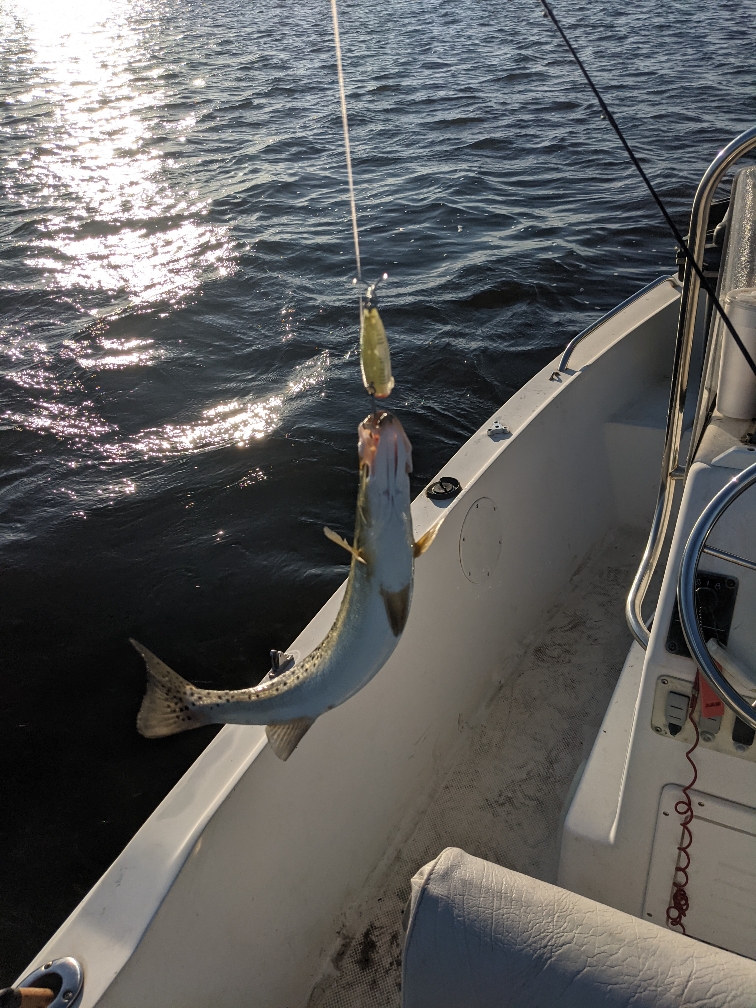 Very soon afterwards I was yelling Bobby start the boat, as I hooked a tarpon and was being spooled quickly but it pulled free. Soon afterwards I was yelling for the boat to be started again due to hooking what had to be a kingfish as quickly as I was spooled and cut off. After all of this excitement I was put to shame as all I was able to put in the boat was an ole rock bass while my partner had put 2 keepers in the live well. 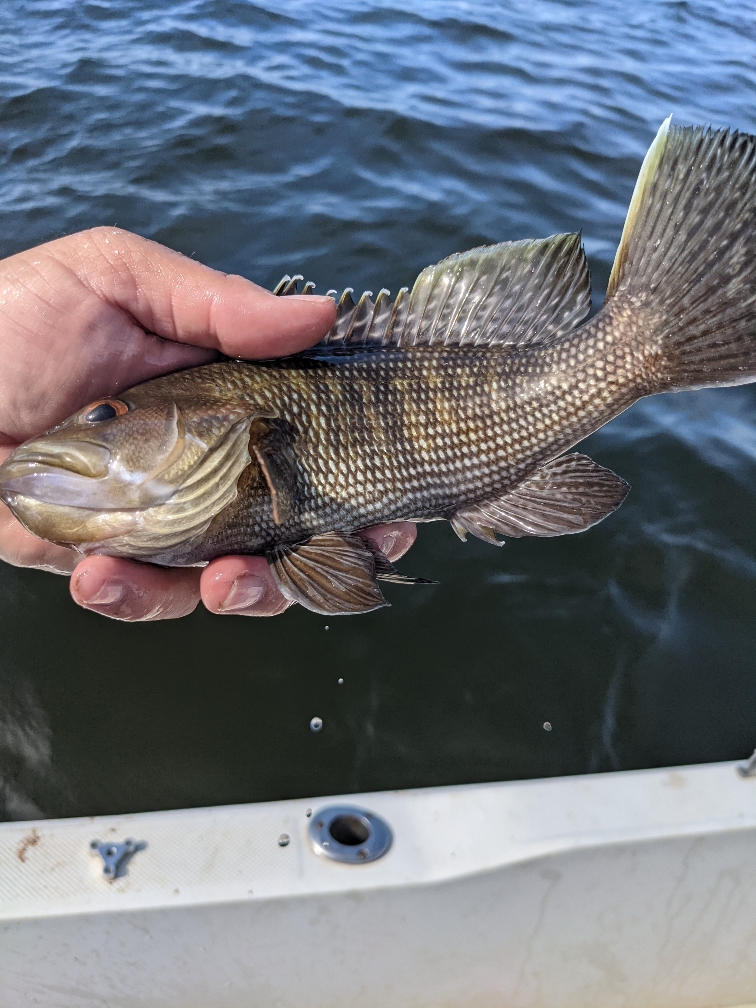 We then had a lull for about two more hours and then we came upon a large school of bait being busted by everything it seemed and had a 30minute feeding frenzy and caught some sand trout, seatrout, Spanish, and some of the largest lady fish I've ever seen. After the frenzy of catching and feeding died down we fished hard for 2.5 more hours with nothing but short bsb and trout to show for it and decided Kathy's sounded better than fishing any longer since we skipped lunch. 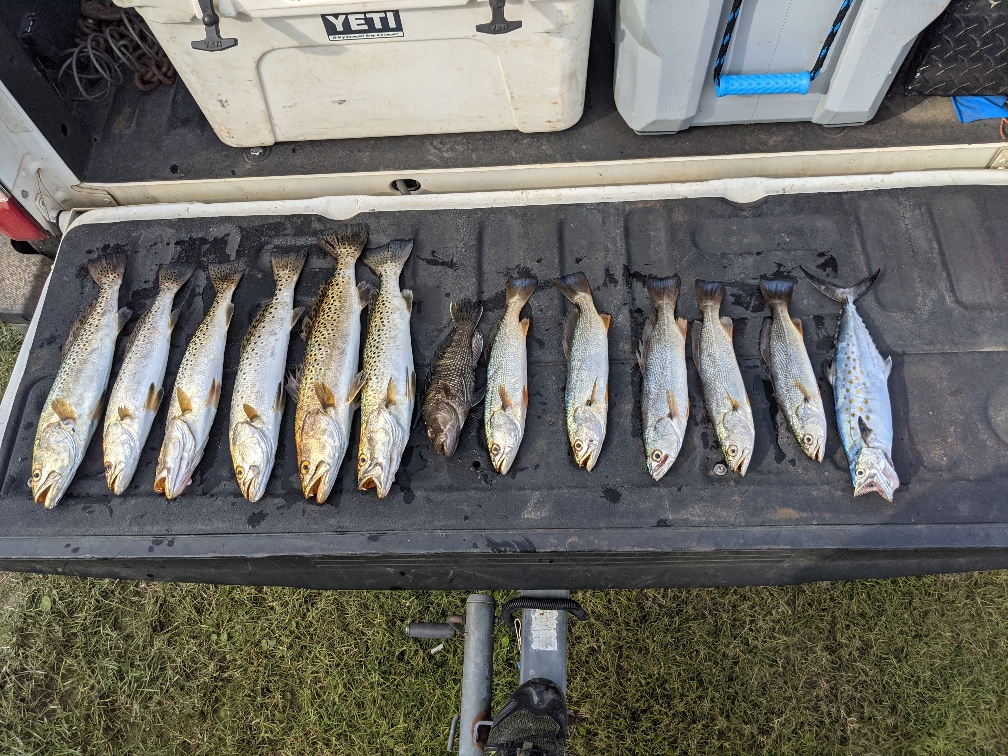 But still decent considering how weird this fall has been and we debated at supper which hat had the best fishing luck. 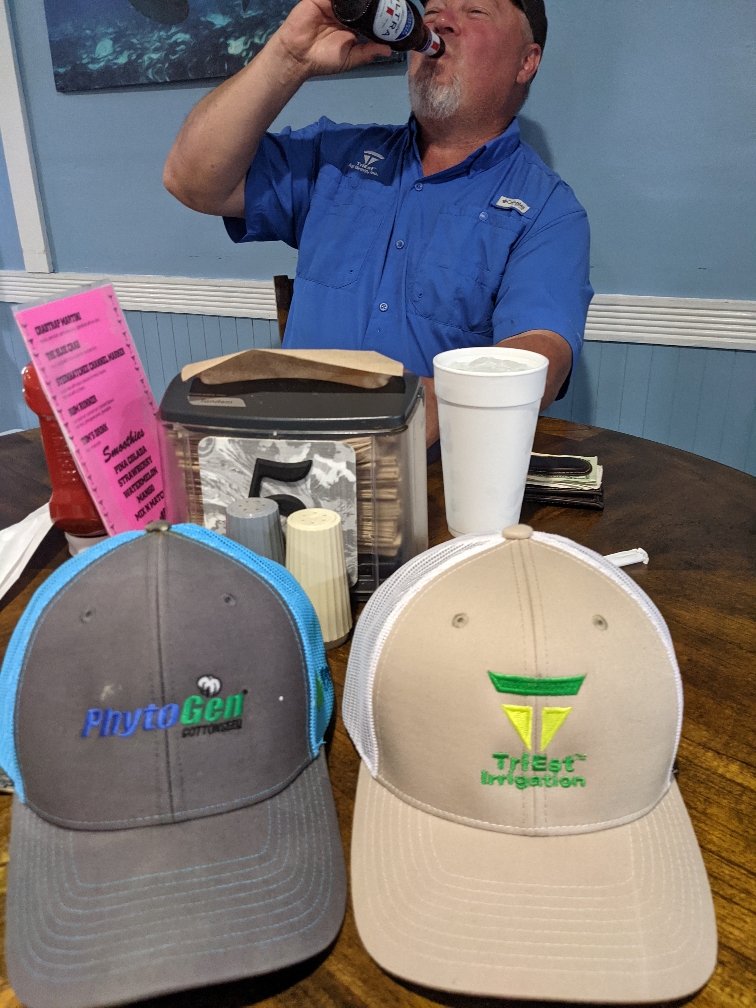 Kathi's was awesome as usual while I had snapper that was excellent they cooked Bobby an excellent steak as well. Now we're planning a November trip to hopefully get some better water conditions.

As a side note, the red tide issues seem to be fairly minor as far as I saw we saw a couple of dead pinfish and a dead amberjack that may have been killed by a shark instead of red tide because it was chewed up pretty bad.

Nice! Reports don't get any better than that!

Life is short.... Ride a Harley and fish a Sea Pro
http://seaproforum.proboards.com/
Top

I enjoyed your report!
Top

Such an excellent photo essay! Thank you.
Top

Me and my old time fishing buddy finally made it to the flats 10/21 and 10/22. Put in at Old Fort ramp, stayed at SIFC overnight Weds.- Friday. Thursday ran East toward the Gray Mare, slow bite but picked up a bunch of shorts along three or four different drifts. Picked up one 15.5" in 3'-5' using live shrimp and gulps under Cajun Thunder. My buddy caught several casting jigs and swim baits. Kept moving East looking for legals. Made several stops working towards Aucilla Flats. Way East buddy put a 17.5" in the box. By late afternoon we managed a decent box two short of limit. Friday headed straight East toward Aucilla Flats. By 9:30 we had four in the box including a 18". I hope I did the right thing but around 10:00 I put a 23.5" in the boat. I thought hard but she is still swimming out there unless something got her since Friday. Maybe Karma worked because we had a limit by 12:30 including two nice black bass. Must have caught a dozen or more short bass and probably 50 short spots overall. Caught three puppy reds biggest probably 15". Only caught one smooth puffer, maybe eight hardheads and one pinfish so the trash count was low. All my catch was under corks either gulp or live shrimp with the majority and the big cow being gulps. Fished 3'-6' found the honey around 4'. Really enjoyed the trip and brought a family fish fry home. My 90 yo mother told me when I left I had better bring some fish home she was craving fresh fish. I was able to do that so that made it even better. Good fishing guys.
Top

Very nice report. Thanks for posting.

Nice report Big Tim. Releasing a large female trout is a service to yourself, your fellow anglers, and future generations. Studies have shown that large breeders are exceptionally productive reproducers.

If you are lucky enough to get to fish a lot, and are pretty good at it, it's easy to say "you should release that big fish". You are likely to catch an even better one next week, so not a big deal. But for a lot of folks, a big trout can be a one-time, big deal, highlight catch, and it's a big ask to let her swim away. So kudos to you guys and enjoy looking back at the pics I know you took.