Had a family trip to Mashes Sands and took along the kayak. Took my niece out on Sunday as she has been wanting to fish. She is 8, so I decided it would be best to paddle to a beach and get out and let her fish. We headed out at daybreak. Saw something tearing up the bait at the little point right as we arrived. I got her set up with a popping cork and showed her what to do. I got bored and grabbed my reel and was working a DOA jerk shad in mullet color, circle hook with no weight, at the area where I had seen the bait spooked about 30 minutes earlier. All of a sudden something hit it. As the hook sank home, I thought to myself, this may be a very nice red as it took off sideways to me. Then it went straight away and the drag was SCREAMING. Before it could register in my brain, a very nice tarpon (pushing 75 I would just take a guess, well longer than the 8 year old was tall!) gave us a show. I got see a couple more aerials as it was rapidly spooling me. I knew how this would end and at the fourth display, which was quite impressive, it spit the hook (not much line left - I was on shore, not much line and I just wanted to give the youngun a show for a minute - I knew how it was gonna end). She was squealing watching the tarpon put on some acrobatics.

We caught one short trout on a Skitterwalk (I handed her the pole). She got to handle the fish and get her picture made. We headed in before it got too hot. She had a large day. I took her back and showed her the picture on the wall of my one and only boated tarpon from down in Boca Grande area. It was on her other great uncle's boat. She is impressed by my fishing skills (she's 8, and although very smart, she is not yet wise!

).
Ducks, turkeys, flats fishing. Who has time for golf?
Top 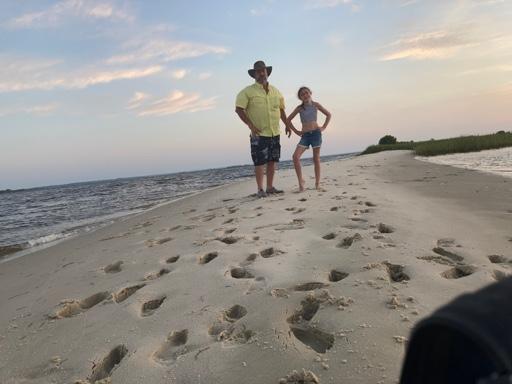 Sent from my iPhone using Tapatalk
Ducks, turkeys, flats fishing. Who has time for golf?
Top

Nice work Doc. Glad you showed her a good day on the water
Turn off your mind relax and float downstream
Top

Great story and appreciate the focus on the youngsters! Definitely a story she'll be telling for quite some time!
Three-fourths of the Earth's surface is water, and one-fourth is land. It is quite clear that the good Lord intended us to spend triple the amount of time fishing as taking care of the lawn. ~Chuck Clark

Thanks for sharing. Made the day for both of you. That tarpon must have wandered away from Boca Grande Pass. There haven't been any sightings near the Forgotten Coast.

Nice! It’s the unexpected that keeps me coming back. Thanks for sharing,

Ditto, great report. The kids are grown and moved off now, but I sure miss fishing with them. Great memories.
Top
Post Reply
11 posts • Page 1 of 1